Raleigh, N.C. – PPP’s newest Republican national poll finds that Ted Cruz has the big momentum following the official announcement of his candidacy last week. His support has increased from 5% to 16% in just over a month, enough to make him one of three candidates in the top tier of GOP contenders, along with Scott Walker and Jeb Bush.

Walker continues to lead the field with 20%, although that’s down from his 25% standing a month ago. Bush continues to poll at 17%, followed by Cruz at 16%, Ben Carson and Rand Paul at 10%, Marco Rubio and Mike Huckabee at 6%, Chris Christie at 4%, and Rick Perry at 3%. 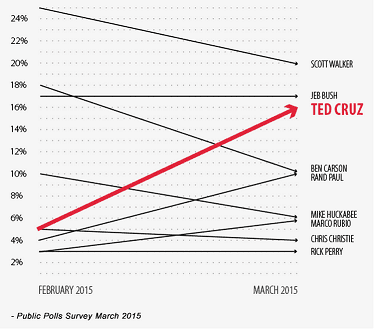 Cruz has really caught fire with voters identifying themselves as ‘very conservative’ since his announcement. After polling at only 11% with them a month ago, he now leads the GOP field with 33% to 25% for Walker and 12% for Carson with no one else in double digits. Last month Walker led with that group and almost all of the decline in his overall support over the last month has come within it as those folks have moved toward Cruz. Cruz’s name recognition with Republican voters has increased from 61% to 82% since his announcement.

Two candidates are clearly losing ground. The biggest is Ben Carson, who’s dropped from 18% to his new 10% standing. There’s a lot of overlap between the voters who like Carson and the voters who like Cruz and where previously they’d been naming Carson as their first choice the momentum for Cruz lately seems to have really cut into Carson’s support. The other potential candidate who seems to be losing some steam is Mike Huckabee. A month ago he was at 10%, but now his standing has declined to 6%.

“This contest is starting to bear some resemblance to the 2012 Republican nomination fight,” said Dean Debnam, President of Public Policy Polling. “A couple of months ago Ben Carson was the hot thing in the field, now Ted Cruz is and Carson’s support is drying up. It’s very reminiscent of the boom and bust we saw with various candidates four years ago. And Jeb Bush remaining steady as others rise and fall is also similar to how things went for Mitt Romney went that cycle.”

PPP surveyed 443 Republican primary voters from March 26th to 31st. The margin of error for the survey is +/- 4.7%. This survey was conducted through automated telephone interviews and interviews over the internet to voters who don’t have landline phones.