President Obama is now blatantly breaking the law in an effort to ban one of the most popular types of ammunition for the AR-15 semi-automatic weapon, and the timing comes just before a massive amount of supply of the bullets is due to arrive in the U.S., according to Gun Owners of America Chief Counsel Michael Hammond.

Last month, the Bureau of Alcohol, Tobacco, Firearms and Explosives, or ATF, announced it was planning to fast-track a ban on 5.56 mm M855 ammunition through executive action.

Hammond said the timing is not a coincidence. 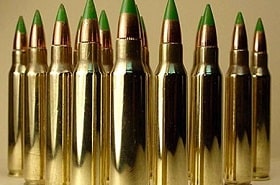 “There is a massive backlog of M855 ammunition from NATO, which was about to come onto the American market as a result of the fact NATO is being encouraged to go from lead to copper ammunition,” Hammond said.

“This action, if it were successful, would [make illegal] the sale and possession of that to individuals in America of this massive backlog, which is coming on line from a government surplus.”

Obama stayed away from the issue of guns during the 2012 campaign, but a month after his re-election in 2012, a gunman murdered 20 elementary school students and six adults at Sandy Hook Elementary School in Newtown, Connecticut. The president then called for Congress to take decisive action on the issue of “gun violence.” However, even Democrats rejected the effort.

“In the spring of 2013, [Obama was] trying to wave the bloody flag of Newtown, in order to exploit those victims for political purposes and ban this gun. In the end, he was not only not successful, he didn’t get a majority vote. He didn’t even get 40 votes in a Democrat-controlled Senate for banning the AR-15,” said Hammond, who added that the new executive action comes as no surprise.

“So what does he do?” Hammond asked. “He turns around and says, ‘If I can’t ban the gun legally through the constitutional process, what I’m going to is ban it illegally by banning the most common ammunition used in it and making that completely unavailable. Furthermore, I’m going to do it in such a way that explicitly contradicts the statute which I’m purporting to use in order to do this.” …

Hammond said the revolt to this executive action is already underway.

“The Second Amendment community is really all fired up on this,” he said. “We already have a Senate office – I’m not authorized to disclose the name – that’s called us and said, ‘We want to offer language to ban this Obama action and to defund it on whatever the first appropriate vehicle is. They would have liked to use the DHS appropriations bill, but we will use whatever the first appropriate vehicle is to reverse this unlawful action.’” …

Another major fight centered on federal efforts to dry up the money supply for the gun industry.

“They tried to use a program called Operation Chokepoint to convince banks not to do business with gun dealers and gun manufacturers, thereby financially strangling the Second Amendment,” Hammond said. “We were successful in beating that back.

“As a matter of fact, we got a Democratic Senate to tack language onto it’s appropriations bill, which says, ‘We’re defunding the whole program, not just vis á vis guns but vis á vis everyone.”

There are other challenges unfolding in addition to the effort to ban certain ammunition. Hammond said one of the biggest ongoing fights centers on Obamacare and efforts to gather information on gun owners.

“The Obama administration is working to use Obamacare in order to encourage doctors to enter into their computerized records who owns a gun and who doesn’t own a gun,” Hammond said. “There is a real feat that the Bureau of Alcohol, Tobacco and Firearms will begin trolling this data bank to determine who should additionally be added to its gun ban black list.”

A description of the proposed rule change can be found on the ATF’s website….