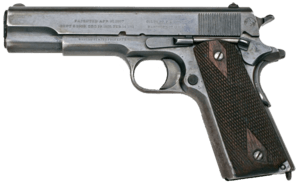 With the current attack on personal gun ownership and the Second Amendment, the radical Left has twisted the phrase “assault weapon” to try and take guns away from law-abiding Americans.

Real assault rifles are used by modern infantrymen and are capable of firing in a fully-automatic mode. Yes, they are currently available to citizens — but one must submit to a federal background check (which can take months), be photographed and fingerprinted, pay a tax of $200, and get a sign-off from the local chief of police or sheriff. Moreover, because of their limited supply, machineguns run in the thousands of dollars to purchase.

The semi-automatic “assault weapons” are NOT machineguns. They don’t fire like machineguns, and they are functionally no different than many pistols or shotguns which have been available to civilian markets for over a century and which can fire in a semi-automatic mode. So, why the fuss over simple cosmetics when it doesn’t matter one whit to the internal function of the rifle?

This is why Americans must begin changing the terminology we use to our favor. So-called “assault weapons” are not designed to assault anyone — they are “defense weapons” for Americans to defend our families, our country and our Constitution. In colonial times, the “defense weapon” of the day was a musket, and our forefathers used muskets and cannons to fight the British to secure our freedom.

Today, the modern analog of the colonial musket is the AR-15 style rifles that have the ability to use standard-capacity magazines for self-defense. God forbid we have to use our “defense weapons.” But, as the old saying goes, “better to have it, and not need it, than to need it and not have it.”

Victims of tyranny — from the Jews in the Warsaw Ghetto, to the victims of Joseph Stalin and Idi Amin — have all wished they were armed. We should not join their ranks of victimhood.

Why would Americans give up the right to have the best possible defense weapon we can have to protect our home, family, state and nation from criminals of ALL kinds?

So, when anyone tries to turn the conversation toward “assault weapons,” turn it back to “defense weapons” and, as the line goes, “stick to your guns.”

Tim Macy is the Vice Chairman of Gun Owners of America, a national gun lobby with over 300,000 members.