Obama Coming After Your Guns

Obama Coming After Your Guns 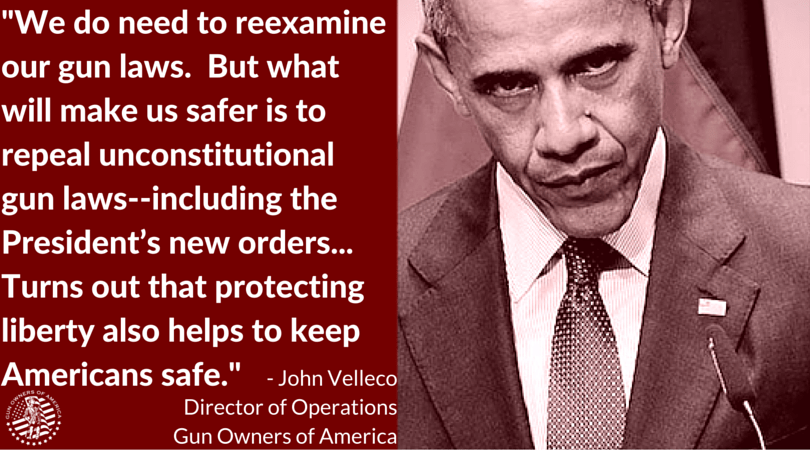 Fresh off his Hawaiian vacation, President Obama set down his golf clubs and picked up his pen this week for another assault on the Second Amendment.

Having tried — and failed — to pass gun control through Congress multiple times, Obama is now doing what he always does when he doesn’t get his way. By executive fiat he hopes to bypass the Congress, and the rule of law, and enact massive new gun control measures.

Obama is clearly frustrated by the gun lobby.  So much so that he spent the bulk of his most recent Weekly Address talking about his “one piece of unfinished business”–passing more gun control.

After meeting with Attorney General Loretta Lynch this week, Obama came up with a laundry list of proposals, the most egregious of which will target private, individual gun owners.

This is nothing new.  For years, anti-gun activists have tried to ban private firearms sales. Sometimes they call it closing the “gun show loophole,” sometimes “Universal Background Checks,” but the aim is the same.

They want ALL firearms sales, whether over the counter at a gun store or over the backyard fence with your neighbor, to be subject to an FBI background registration check.

After all, if the government keeps tabs on every firearm sale, it would make it that much easier to take guns away from people who are next to fall into the “prohibited persons” category.

While stopping short of implementing complete Universal Background Checks, the President’s Executive Orders will have a chilling effect on private firearms sales by treating individuals as licensed gun dealers if, in some cases, they sell “even a few” of their own firearms.

There’s no specific criteria that the government can point to that clearly states when an individual suddenly becomes “engaged in the firearms business,” but individuals who sell their private collections — whether at a gun show or anywhere else — will do so at significant risk.

If the government determines that the person was, in fact, acting as a gun dealer, he would face up to five years in prison and a $250,000 fine. Not many people will be willing to sell a gun collection of any size with that Sword of Damocles dangling overhead.

In another order, Obama is instructing the Social Security Administration to turn over to the FBI’s gun prohibition list (NICS) the names of beneficiaries who are determined to be unable to handle their own affairs.  This could potentially impact millions of senior citizens, whose cherished gun collections could be at risk of confiscation.

The stage is also being set to use ObamaCare mental health data to bar people from owning guns.  Obama is proposing an additional “$500 million investment” for mental health care, while at the same time “expressly permitting certain HIPAA covered entities to provide to the NICS” specific information regarding mental health patients.

This is getting closer and closer to “see a shrink, lose your guns,” which is the reason Gun Owners of America opposed ObamaCare in the first place.

There’s more to the President’s new orders, including hiring hundreds of new government agents to enforce his new gun regime; adding more names to NICS through state records; and instructions to the Defense Department and other government agencies to develop so-called “smart gun” technology — an expensive endeavor that can lead to all sorts of problems for self-defense firearms down the road.

With his new orders, Obama thumbs his nose at the Congress and the American people.  Congress voted on Universal Background Checks and other gun control measures many times, most recently just days after the San Bernardino shooting, and they went down in defeat each time.

But in his last year in office (cue the Hallelujah Chorus), Obama is in full community activist mode.  Instead of doing the important work of protecting liberty, he is rallying his leftist troops to agitate for restricting Americans’ liberty to freely own firearms.

In so doing, he makes a mockery of the tremendous challenges we face in keeping America safe from violent thugs and deranged individuals, not to mention radicalized jihadists.

Obama believes that because of recent violence we should take a closer look at our gun laws.

On that point, we agree:  We do need to reexamine our gun laws.  But what will make us safer is to repeal unconstitutional gun laws–including the President’s new orders.

And GOA continues to push for the repeal of gun free zones that make for so many “soft” targets. This point is driven home by the fact that almost every mass shooting in America since 1950 occurred in a “gun free zone.”

John Velleco is the Director of Operations for Gun Owners of America, a grassroots lobbying organization representing more than two million gun owners.