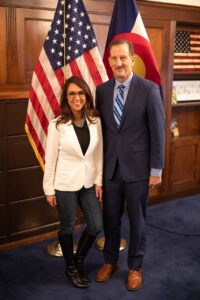 Rep. Lauren Boebert has introduced a bill in the House to REPEAL the massive gun control law that was enacted in June.

Here’s what we’re fighting to repeal:

Now GOA needs grassroots activists like YOU to urge your representative to co-sponsor this bill in the House and to urge one of your Senators to step up and introduce a companion bill in the Senate.

Please add your name to our pre-written letter urging action from the House and Senate to repeal the sweeping gun control package enacted in June.

I’m going to be completely honest with you.

Getting this bill passed in Pelosi’s House will be a challenge.

Nevertheless, we need to start building momentum right now. Because, if and when Republicans take over, we need to be certain there’s already a bill in place with strong support and backing to repeal this gun grab.

If Congress hasn’t heard a peep about this unconstitutional gun law until January of next year, this won’t be a priority for the new House majority.

We need to get the House moving NOW.

It’s especially important to pressure Republicans to take action now, because many of them voted for this bill back in June.

GOA warned each and every Republican that passing this law would be a political death sentence.

Winning one minute of praise from the mainstream media that hates their guts was not worth betraying their gun-owning constituents.

The media has already moved on and Joe Biden is now essentially calling Republicans enemies of the state. So much for bipartisanship.

Swing voters, who, according to polls, actually do not have strong feelings about gun control, have also already forgotten about the “bipartisan” gun control deal.

But you know who hasn’t forgotten? Gun owners.

And boy, were we right when we said this would cost Republicans politically…

…After leading on the generic congressional ballot for months and months, Republicans are now starting to fall behind.

A July poll of more than 22,000 gun owners found that 68% consider themselves single-issue voters when it comes to gun rights.

It’s no coincidence that enthusiasm among Republican voters has been declining.

But the House and Senate can rectify this mess BEFORE the election by supporting Lauren Boebert’s efforts to repeal the recent assault on our God-given rights.

So please, add your name to our pre-written letter to urge your representative to co-sponsor this bill in the House and to urge your Senator to step up and introduce a companion bill in the Senate.