GOA Wins a 2A Sanctuary Victory in Court! 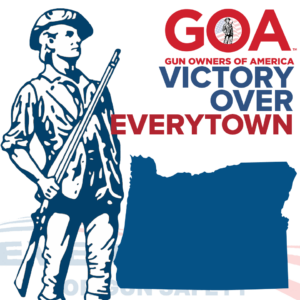 But GOA, who was joined by the Oregon Firearms Federation (OFF), came to the defense of the ordinance. And we are very thankful that the court sided against Everytown.

Over 60 percent of municipalities in the United States have passed 2A sanctuaries. So this case marks a huge victory for not only gun owners in Columbia County, Oregon, but Second Amendment supporters nationwide.

You can read the GOA and OFF brief here and the judge’s decision here. 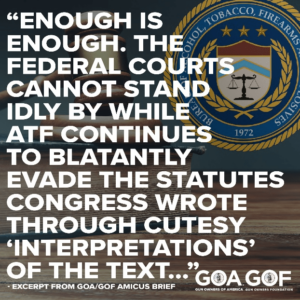 We reported to you earlier this week that GOA and GOF have submitted a supplemental brief in our bump stock case before the Sixth Circuit Court of Appeals.

Ours is the only case that has been victorious in getting a court to admit what gun owners already knew — that a bump stock is not a machinegun.

Now, the NRA announced yesterday that it is joining this effort, as they have submitted their own amicus brief.

We are glad to see the NRA join Gun Owners of America and Gun Owners Foundation in our battle to protect the Second Amendment, as the ATF’s Final Rule could force all semi-automatic firearms to be unconstitutionally regulated as machineguns.

Ammoland recently interviewed GOA’s attorney in this case, Rob Olson, who said that:

Congress did not delegate to ATF the authority to define or redefine the term “Machinegun.” This fact is important because the courts have ruled that only Congress has the power to write new federal criminal law.

Olson, who is also one of the attorneys in the 2A Sanctuary case mentioned above, makes the point that giving “deference” to the ATF “will only further embolden ATF’s lawless actions.” As stated by Ammoland:

Many consider the ATF to be out of control. The ATF is trying to use deference to shut down the unfinished firearm frames and pistol-stabilizing brace markets. Many do not believe that the agency has the power to do so because they would be making de facto laws. If GOA is successful in the bump stock case, then it could throw a monkey wrench into the ATF’s future plans.

This is exactly why this case is so important. A win in this case can help stymie other lawless attempts by the ATF.

GOA will make oral arguments before the court in October. Please stay tuned! 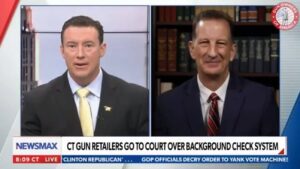 Next Empowered 2A Meeting is this Wednesday! 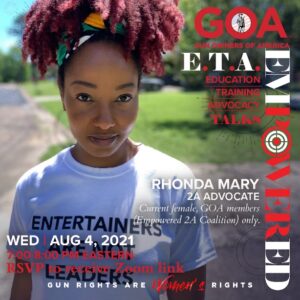 The Empowered 2A meeting for August will have a special guest speaker: Rhonda Mary.

Join Antonia Okafor, GOA’s Director of Outreach, on Wednesday, August 4 at 7pm EST. And spend some time with Rhonda Mary – a gun rights advocate with a very unique perspective on the 2nd Amendment.

Learn from this young, rising star in the 2A community. Also, learn about the way she successfully advocates for the 2A through social media.

Register in advance for this meeting:

So ladies, please be sure to attend. And guys, please encourage your wives, moms and daughters to check it out, as well.

Disconnected DC, America Demands the Opposite of Congress on Guns ~ VIDEOS