Disconnected DC, America Demands the Opposite of Congress on Guns ~ VIDEOS

According to the Gun Owners of America, as of June 2021, 1,930 counties, cities, and towns have passed Second Amendment Sanctuary Ordinances (SASO). 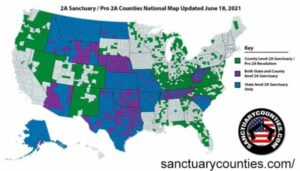 Over sixty- percent of counties in America have declared themselves Second Amendment Sanctuaries.

Second Amendment Sanctuary is not a well-defined term; neither is Sanctuary City for illegal aliens.

There is no governing body dictating the outcome for these localities. Organizations dedicated to protecting the Second Amendment and advancing our liberties are helping where they can, but they don’t have any legislative power.

The rise of hundreds of municipalities in over forty states that became Second Amendment Sanctuaries is a completely grassroots effort; aided by groups like Gun Owners of America…