The members of Gun Owners of America are making their voices heard in a big way!

From coast-to-coast, GOA-backed bills are getting passed by state legislatures and signed into law. 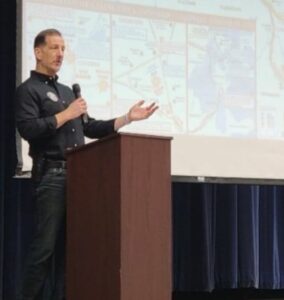 GOA’s Erich Pratt speaks at the BamaCarry Freedom Conference in February, where he called for Alabama to pass Constitutional Carry.

A recent example occurred this Thursday, when Alabama became the 22nd state to enact a GOA-backed permitless carry law.

GOA activists had to overcome a mountain of opposition from turncoat politicians, Bloomberg-funded groups backing gun control, and even a radically anti-gun Sheriffs Association.

But Gov. Kay Ivey’s signature now culminates a ten-year long battle to enact the law, which shows that good things can happen to those who persevere.

GOA is thankful to all our members in the state who took action on our alerts – and to BamaCarry, the local state organization, which has been a driving force for Constitutional Carry over the years.

Thankfully, Alabama is just the tip of the proverbial iceberg. In the days and weeks to come, GOA will be reporting on other states where we are working to dismantle gun control laws. So stay tuned!

Thanks to your help and support, GOA is taking the Bureau of Alcohol, Tobacco, Firearms and Explosives (ATF) to the highest court in the land. 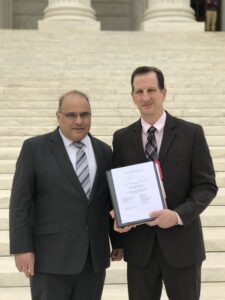 The key issue is the question of whether a government agency (like the ATF) can bypass Congress to “make laws” by executive fiat – especially when the new penalties infringe upon constitutionally protected rights and threaten to send non-violent citizens to jail.

If the ATF can bypass federal law and decree that a bump stock is a machine gun, then they can declare anything to be a machine gun – including AR-15s.

GOA has been in litigation with ATF since the day the bump stock ban was published and was able to win a victory in the U.S. Court of Appeals for the Sixth Circuit, which was later overturned when the 16 judges on that circuit split evenly between GOA’s position and ATF’s position.

GOA Battling Biden & Bloomberg
Over 2A Sanctuary Law in Missouri

By many accounts, Missouri has the toughest Second Amendment Protection Act (SAPA) in the nation.

So it’s not surprising that the Biden Justice Department, headed by anti-gun Attorney General Merrick Garland, is challenging the state of Missouri over its SAPA law.

Bloomberg’s anti-gun Everytown organization has also filed a brief in opposition to Missouri’s 2A sanctuary law. 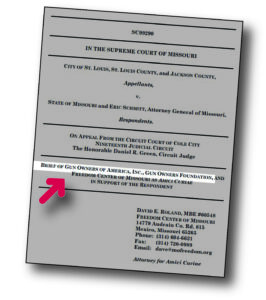 But thanks to your support, GOA is fighting both Bloomberg and the Biden administration and has filed an amicus brief defending this important law. The legislation imposes $50,000 penalties on any agency that enforces federal gun control that exceeds what is allowed by Missouri law.

The Missouri Supreme Court heard oral arguments in February relating to this case. There is no projected timeline for a decision.

In February, gun grabbers tried to ban the right to possess, buy, transfer, and sell standard-capacity magazines that hold more than 15 rounds.

But thanks to the emails and phone calls from the grassroots army in the state, we were able to apply pressure to State Representatives to defeat this bill.

Special thanks go to all the State Representatives who fought to keep people’s gun rights intact.

And special thanks go to Representative Stefani Lord ( R ) who used GOA’s information on how citizens need multiple rounds for self-defense to lobby her fellow legislators in opposition to the ban!