New York-style gun control may be on its way to Minnesota, if anti-gun legislators have their way.

The bills, HF 8 and HF 9, were drafted by some of the minions beholden to New York billionaire Michael Bloomberg, who is using his vast fortune to buy up states like Minnesota for his anti-gun cause.

The first bill (HF 8) will impose Universal Background Checks, which means it will ban private sales that don’t first get permission from a government bureaucrat. 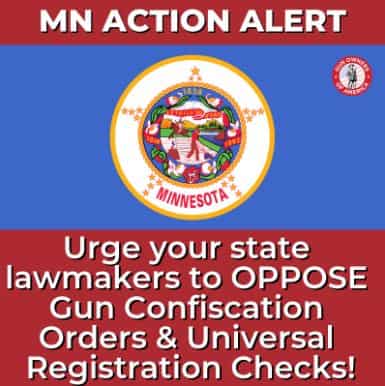 The bill will also result in universal gun owner registration, because there will need to be a 4473 form for every gun sale.

The second bill (HF 9) will bring gun confiscation to Minnesota.

Under HF 9, the police or an “angry ex” can petition a judge, requesting that you be stripped of your Second, Fourth, Fifth, and Fourteenth Amendment rights.

Because of its clownish draftsmanship, “any family” member may petition to strip you of your constitutional rights. The term “family member” is nowhere defined for purposes of this Act.

But suffice it to say that, although Massachusetts Senator Elizabeth Warren is only 1/1024th Indian, her Cherokee “family” could petition to take away her guns.

Rather, all they have to show is that you are, subjectively, “dangerous” to someone — and they only have to show that there are “reasonable grounds” to believe that.

That’s all it takes for you to be stripped of your constitutional rights.  There doesn’t even have to be a probability that you are dangerous. Just “reasonable grounds” — and then your guns are gone, or even worse, you could be seriously injured when police come to your door.

Sure, you’ll get a hearing in 14 days — where you can try to convince the judge he made a mistake.  In circumstances like these, judges NEVER rule for the gun owner.

One more consideration:  You would think that even anti-gun liberals would have some problem with giving police the ability to get a rubber-stamped order to raid the home of suspected illegal immigrants, based on an allegation that they are “dangerous.”

If they want to turn Minnesota gun ownership into some horrible nightmare, House Bill 9 is their vehicle.  If not, there is still be time to stop it.

But bottom line: both of these bills are horrible.

So please urge your House member (ABOVE) to oppose HF 8 and HF 9!