Sheriffs Who Are Protecting Liberty

An increasing number of sheriffs are rising to resist federal overreach in their counties.  About 100 of them met in mid-September at the National Press Club in Washington, DC.

The gathering was organized by the Constitutional Sheriffs and Peace Officers Association — a group that was formed by former Sheriff Richard Mack.  It was a time of mutual encouragement, where several sheriffs shared their experiences in resisting federal overreach.

Sheriff Mike Lewis of Wycomico County, Maryland was one of the sheriffs in attendance.  He got national attention recently for saying that the feds better not try grabbing guns in his county. 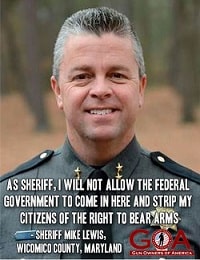 “I can tell you this,” Lewis said, “if they attempt to do that, it will be an all-out civil war. No question about it.”

Another attendee, Sheriff Denny Peyman of Jackson County, Kentucky, was equally blunt.  “My office will not comply with any federal action which violates the United States Constitution or the Kentucky Constitution which I swore to uphold.”

Gun Owners of America presented Sheriff Peyman with the “Nullifier of the Year” award last year because of his strong commitment to defend the Constitution — and the Second Amendment in particular.

GOA goes to bat for pro-gun sheriff … and wins! 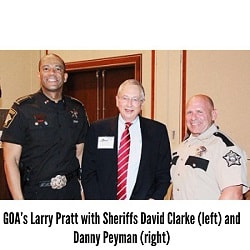 the “High Noon Award” last year for “standing for truth when others run, and for telling the truth even though politically incorrect.”

To be sure, Clarke’s political IN-correctness — and his pro-Second Amendment views — has provoked intense hatred against him from the political Left.  Former New York City Mayor Michael Bloomberg, who is a billionaire, poured $150,000 into his sheriff’s race this past summer, trying to unseat him in his primary.

But Daddy Warbucks’ money couldn’t buy that election, as Clarke won by a 52-48 percent margin.  GOA’s Political Victory Fund rallied gun owners in the state of Wisconsin to contribute to Sheriff Clarke’s campaign.  And GOA’s Facebook page made gun owners around the country aware of this important race.

Sheriffs standing up to the feds 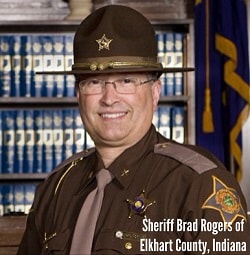 Two sheriffs who have attracted something of a cult following are Brad Rogers of Elkhart County, Indiana, and Bennie House of Otero County, New Mexico.  While they were not in attendance this September, their stories were heralded as examples to follow.

Sheriff Rogers is a GOA Life Member who interposed himself between the Food and Drug Administration and a raw milk dairy farmer.  The feds were on the verge of confiscating the farmer’s equipment which would have bankrupted him.

But Sheriff Rogers communicated with the head attorney at the FDA and told her that if they put one more foot on the farmer’s land, he would arrest them.  She, in turn, threatened to arrest him.  Rogers simply ended the debate by replying: “Game on.”  That was almost three years ago, and the FDA has been MIA ever since.

Then there’s Sheriff Benny House in New Mexico, who led a confrontation with the Forest Service several years ago on behalf of some of his citizens.  The locals were hauling dead trees out of National Forest land in violation of Forest Service policy.  The locals not only wanted the firewood provided by the dead trees, but were also lessening the risk of forest fire (dead trees burn much more quickly and serve to make fires more likely to spread).

Another sheriff who has experienced similar conflicts with the Forest Service is Gil Gilbertson of Josephine County, Oregon.  He also interposed himself between the feds and the people, and achieved similar results.  In fact, there is not one known example of the feds actually firing on any county’s residents or sheriffs in such situations.

There are a couple of standoffs that did come close — and ironically, they were both in Nye County, Nevada.  The Wayne Hage family had an armed standoff with the Bureau of Land Management ten years ago to protect their right to water their cattle on federal lands.  And the Cliven Bundy family went through a similar experience earlier this year.  The Nye County Sheriff got involved, albeit belatedly this year, whereas Sheriff Tony DeMeo stood off the BLM with his armed deputies to protect the Hage family.

The liberal media is not covering such stories, but clearly there is some good news.

Larry Pratt is the Executive Director of Gun Owners of America, a grassroots gun lobby with more than 750,000 members and activists.