Reports of an active shooter are always “breaking news,” until a concealed carry holder shows up to diffuse the situation.

Then, all one hears is … well, crickets.  They go silent.

That’s exactly what happened on July 24 in Darby, Pennsylvania, when a doctor saved countless lives after he incapacitated a patient who had armed himself, walked past the gun-free zone sign and gunned down a case worker.

Next on the killer’s hit list was the doctor himself. 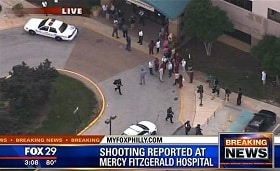 But what the gunman, Richard Plotts, hadn’t counted on was that his intended target, Dr. Lee Silverman, had defied hospital policy and was carrying a gun of his own.

Dr. Silverman is a lawful permit holder who regularly carries a handgun.  Having come under fire, the doctor crouched behind a desk and shot back, hitting Plotts three times in the mid-section.

“Without a doubt, I believe the doctor saved lives,” said Police Chief Donald Molineaux.  “Without a firearm, this guy could have [gone] out in the hallway and just walked down the offices until he ran out of ammunition.”

Similarly, the District Attorney Jack Whelan said that if Dr. Silverman had not brought his handgun to work, then “he’d be dead today, and I believe that other people in that facility would also be dead.”

The shooting at the Mercy Fitzgerald Hospital highlights the failure of gun control in several ways.

For starters, the medical facility is a gun-free zone.  No one, except police, can be armed.

“There’s a sign on the door that says you have to check your weapons at the front,” said Anna Smith, an ultrasound technician. “But you can’t expect every crazy person to do that.”

Too bad that our President, and many in the Congress, can’t seem to wrap their minds around that simple truth.

The truth is that Richard Plotts was ineligible to own firearms.  Not only does he have a long criminal record, he had been involuntarily committed three times over the past few years.  Both criteria should have kept him from legally owning or possessing firearms.

But that disqualification didn’t stop Plotts from getting firearms — both the ones recovered at the scene of the crime and the ones at his home.

Ignoring evidence that guns save lives

According to the Crime Prevention Research Center, the number of concealed carry permit holders has more than doubled in this country since 2007, even while gun homicides have fallen by 12% during that same period.

But the anti-gun Left chooses to ignore these facts, and it results in asinine comments coming from their mouths.

One NBC News pundit stated that Dr. Silverman should not have been armed, despite the fact that he saved countless lives by using his gun.

And then there’s the Michael Bloomberg-puppet Shannon Watts, who heads up the anti-gun Moms Demand Action.  In June, a CNN host asked her if there were any examples of mass shootings that had been halted by a law-abiding gun owner.

Her answer?  “This has never happened.  Data shows it doesn’t happen.”

Well, Ms. Watts, care to issue a retraction — especially in light of the Darby massacre that didn’t occur?

Like “ambulance chasers,” you frequently see the anti-gun Left running to the scenes of tragic shootings and stepping over the dead bodies to call for more gun control.

But after the Darby shooting, what did Shannon Watts have to say?

Erich Pratt is the Director of Communications for Gun Owners of America, a grassroots gun lobby with over 500,000 members and activists.