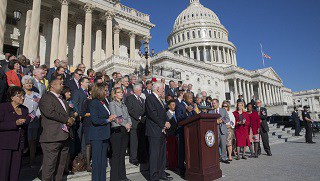 The Las Vegas attack that took the lives of 59 people and wounded hundreds of others immediately spurred another round of liberals calling for gun control. As a Muslim American who has been staunchly liberal most my life, I agreed with them after most mass shootings.

But this time, I find myself on the other side of the aisle.

Only 16 months ago after the tragic shooting at the Pulse nightclub in Orlando, congressional Democrats staged a sit-in to demand that Speaker of the House Paul Ryan call for a vote on gun control. More specifically, Democrats wanted to ban gun sales to those who were on the no-fly list.

My major problem with that kind of legislation? The no-fly list was created by the government to track individuals who were suspected of terrorism, not convicted. If this law passed, it would have completely subverted the right to due process and restricted one’s right to own a firearm without any convictions in their name. And despite voting overwhelmingly in favor of Democrats, this type of legislation would hurt Muslim Americans the most.

My name is not on a terrorist watch list, nor have I ever been subject to much scrutiny by the TSA or the Department of Homeland Security while traveling in an airport. However, my father, an American Muslim who was born in Pakistan, has been detained multiple times while traveling back and forth to perform heart surgery on those who badly needed it. Since watch lists are created by the government, what’s to stop them from arbitrarily adding my name or any of my relatives to the list? My rights could be restricted if the Democrats had their way.