Click here to remind your Representative and Senators that the Second Amendment does not allow for gun control, but asserts that our gun rights “shall not be infringed.”

Nancy Pelosi: “I Certainly Hope” a Ban on Bump Stocks Will Lead to Further Gun Restrictions

I warned you earlier this week that this might happen.

Congressional Republicans are under extreme pressure to “just do something.” 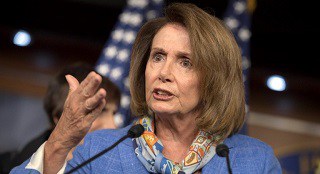 And so rather than focus their ire on the bad guy who took 58 lives on Sunday night, they are turning their attention to an inanimate object — bump stocks.

But through all of this, Republicans have yanked any discussion of concealed carry reciprocity off the table — even though they had promised a vote would be coming soon.

So this is what Congressional leaders are saying about the new restrictions on bump stocks they want to consider:

• House Freedom Caucus Leader Mark Meadows (R-NC) stated that he “would be open to considering a bill” on banning these items.

• And then, of course, there’s House Minority Leader Nancy Pelosi, who when it was pointed out to her that banning bump stocks could lead to further gun control, shot back: “So what? … I certainly hope so.”

Keep in mind that bump stocks are devices that, ironically, were approved by the ATF during the Obama administration, with the intent of helping disabled Americans shoot their firearms.

So imagine this:  Congressional Republicans might be placing themselves to the LEFT of Barack Obama!

If Congress bans or regulates bump stocks, then they will have to ban rubber bands and belt loops on trousers — because these items can simulate the same effect that a bump stock does.

In some cases, you will even have to ban fingers because many shooters can fire a semi-auto nearly as fast as a full-auto.

You can read more about what bump stocks are, and aren’t, by going here.  And you can use the Take Action feature to oppose legislation to ban these items. (NOTE: Only Sen. Dianne Feinstein and Rep. David Cicilline have introduced bills with numbers — S. 1916 and H.R. 3947 — but some Republicans have promised they will be sponsoring bills too.)

Ugh! Vote on Reciprocity is Postponed

Meanwhile, congressional sources are telling us at GOA that a vote on reciprocity has been postponed indefinitely.

So Congress strings us along for almost an entire year (telling us to be patient) and then because one villain commits unspeakable crimes, they are now going to punish law-abiding Americans with further restrictions — and put off the vote on reciprocity.

I’m sorry, but that gets me really upset.

We need to tell Congress: No way! Don’t you dare try to bring up bump stocks for a vote, and leave reciprocity by the wayside.

I hope that you will tell Congressman and Senator that our Second Amendment rights are non-negotiable and that it’s time to bring up concealed carry reciprocity — now!

And I hope you will consider chipping in $10, $20 or $35 to help keep us on the front lines, fighting for your rights.

A lot of people who are members of other groups are really upset with the compromising they see in other parts of the gun community.

They are now signing up as members of GOA because we are not one of those gun groups that ignore the Second Amendment.  When the Bill of Rights says “shall not be infringed,” we take that literally.

Thank you for standing with GOA.

P.S.  Please urge your Representative and Senators to bring up concealed carry reciprocity and to stand firm in opposing ANY and ALL gun control proposals (including restrictions on bump stocks).  And remember that every dollar you contribute to GOA right now will be automatically doubled, thanks to a very generous GOA Life Member!