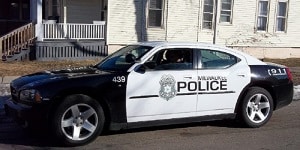 A burglar and a resident ended up in a gun battle after the thug ransacked the home.

That battle resulted in no casualties, and an escaped bad guy.As WITI reports:

Police said a suspect and victim exchanged gunfire after the suspect entered the victim’s home early Saturday, October 28th near 80th and Beechwood.

It happened shortly before 1:00 a.m. Police said after entering the home, the suspect ransacked the home and struggled with the victim, at which point shots were fired by both the suspect and victim. Neither was struck, and the suspect fled the scene.

Man, I would not want to try this at the homes of many responsibly-armed citizens.

How many people are actually asleep at one in the morning? The majority, maybe, but not by that much.

What’s even more strange than the timing is the fact that two parties exchanged gunfire and somehow no one was hurt.

Most homes are not that big, folks. even the accuracy-challenged are able to hit shots at 10 feet or less some of the time.