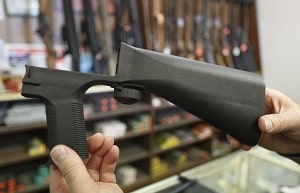 “The Second Amendment to the United States Constitution prevents the federal government from imposing ANY infringements upon our gun rights,” Erich Pratt, GOA’s executive director, said after the Las Vegas shooting.

The debate over bump stocks –– the little-known devices used to deadly effect during last month’s shooting massacre in Las Vegas –– has all but vanished on Capitol Hill. But gun reformers are already seeking to identify similar products in hopes of convincing Congress to apply new restrictions aimed at preventing the next tragedy.

Rather than wait around for lawmakers to react to the next mass shooting, they’re hoping to avert it.

“We can sit back and bring these issues up after something horrible happens, or maybe we can just take a fresh look and … anticipate what might be used in the next shooting and try to create a regulatory structure that makes it harder for criminals to use them,” David Chipman, senior policy advisor with the Giffords group, said Tuesday by phone.

The products singled out by the group are a combination of obscure accessories and military-style firearms that, like bump stocks, are hardly household names. They include binary triggers, which modify firearms so one round is fired with the pull of the trigger, and another upon the trigger’s release; trigger cranks, which allow shooters to fire more rapidly with the turn of a handle; and incendiary rounds, which ignite when they hit a target.

The list also features modern AR- and AK-style pistols, which can be concealed like handguns but have the firepower of rifles, and .50-caliber rifles, which can fire rounds accurately for a mile and retain the punch to pass through a house.

Conservatives on Capitol Hill, backed by gun-rights groups like Gun Owners of America (GOA), have rejected legislation limiting such guns and accessories, citing the Second Amendment rights they deem inviolable.

“The Second Amendment to the United States Constitution prevents the federal government from imposing ANY infringements upon our gun rights,” Erich Pratt, GOA’s executive director, said after the Las Vegas shooting.