March 8 is celebrated as International Women’s Day, and lawmakers all over the country will be championing it today on their social media accounts and other outlets. Well, here’s some hard truth: any lawmaker who voted for gun control, supported gun control, and/or introduced gun control fights against Women’s Rights.

Anti-gun lawmakers don’t get to use #InternationalWomensDay.

Women are the largest growing segment of new shooters. As reported in The New Face Of Gun Ownership by The Cut:

In the ’90s, most gun owners cited hunting and sports shooting as the primary reason. Today, surveys show that two out of three Americans who own guns keep them mainly for self-protection; women especially say it’s the driving consideration. The demographics of who owns guns are also changing.

In fact, it has been reported many times over the last two years that women are the largest growing segment of new shooters. 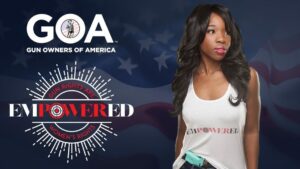 Even the Wall Street Journal reported that “Women Are Nearly Half of New Gun Buyers, Study Finds.”

Gun control disarms adult women of not only purchasing a firearm, but of carrying that firearm on their person. In many places, especially college campuses, women are the main targets of violent crime.

According to the Rape, Abuse & Incest National Network (RAINN):

Women between the ages of 18-24 are at an Elevated Risk of Sexual Violence Among undergraduate students, 26.4% of females and 6.8% of males experience rape or sexual assault through physical force, violence, or incapacitation. 5.8% of students have experienced stalking since entering college.

Over the past decade in Florida, the Republican-led legislature has blocked pro-gun legislation that would allow women to protect themselves. They have blocked Campus Carry and Constitutional Carry.

In 2017, it was the Florida Senate Pro Tempore that killed Campus Carry. State Senator Anitere Flores (R) was the deciding vote that year and she did it with a smile. 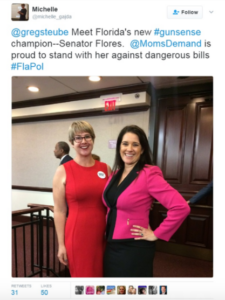 When the Republican Florida Legislature passed the Marjory Stoneman Douglas High School Public Safety Act (SB 7026) back in 2018 — a gun control bill, which among other infringements, stripped the rights of 18-20 year-olds to lawfully purchase firearm — those Republican lawmakers made sure that women remained the victims of violent crimes.

In New Jersey, there was the horrible case of 39-year-old Carol Browne’s murder. Browne was trying to obtain a permit after filing a restraining order against an ex-boyfriend. Browne took the measures she could to protect herself against her 45-year-old ex, including installing security cameras and an alarm system, but was unable to take ownership of a firearm in time.

She was found stabbed to death outside her home, by the very person she was trying to get a gun to protect herself from.

Constitutional Carry would have allowed Browne and numerous women across the country to be able to defend themselves without the need to lease their rights back after jumping through all the hoops created by the bureaucratic red tape of anti-gun lawmakers.

Back to Florida, the Republican-controlled legislature looks like they’re once again going to kill Constitutional Carry.

If Florida has Constitutional Carry, it would mean that law-abiding adults could immediately carry on their person any lawfully-obtained firearm without having to first go through and then wait on a bureaucratic process to obtain a permit.

Again, female victims of domestic violence (or worse) are prohibited by law from arming themselves outside of their own homes until the government goons in Tallahassee approve their application for a government-issued permission slip.

Demand that your legislature recognize these rights as human rights, and support the ability of women to protect themselves.

WY: The Truth and Lies about the Wyoming Second Amendment Protection Act