Will Grigg has taken umbrage at my views about the Muslim murderer who beheaded a woman at the Vaughan Foods plant where they had both worked.

Adam Nolton had converted to Islam and became an offensive salesman for his newfound religion.  He became very agitated when coworkers were not interested in converting to Islam.  He was let go because he was so disruptive. 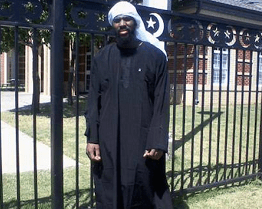 That led to a massive loss of temper prompting a murderous rampage in September of this year.  After ramming his car into some parked cars, he entered the company’s main entrance and set himself upon the first person he found.  Hapless Colleen Hufford was the first person Nolton encountered on his evangelistic mission and she was quickly beheaded by his knife.

Next, Nolton started slicing and dicing Traci Johnson, but did not get to the decapitation because one of the managers of the company, Mark Vaughan, arrived on the scene and shot the Muslim evangelist.  Mrs. Johnson, happily, survived the ordeal.

On a radio talk show, I observed that Adam Nolton had attended the Oklahoma City mosque directed by Imam Imad Enchassi.  Will Grigg has taken me to task on lewrockwell.com because all of the sermons (that have been posted) by Enchassi are non-violent.  However, a Muslim apostate who knew Enchassi well, has said (using the nome d’guerre of Noor) that Enchassi gave many talks that were not made public.  They advocated the obliteration of Israel and other commonly articulated Muslim themes of violence.

Noor, appearing on Fox News in silhouette, told Megyn Kelly that, “To the public, the mosque will not promote terrorism or any kind of radical acts, but when they are among friends and congregants only, they will promote the true teachings of Islam which include the offer to non-Muslims — the choice, rather — that you must convert, live under Islamic rule, or be fought against … jihad for the sake of Allah.”

Interestingly, Imam Enchassi had received a community service award from Oklahoma-CAIR.  CAIR is a group that the FBI has linked to the Palestinian terrorist group Hamas.

It would be very comforting to hear a denunciation by Enchassi of one of the more important Quranic verses, namely Sura 47:3-4: “Those who reject Allah follow vanities, while those who believe follow the truth from their lord.  Thus does Allah set forth from men their lessons by similitude.   Therefore when you meet in battle those who disbelieve, then smite the necks until when you have overcome them, then make (them) prisoners.”  (Part of this verse had been posted on Nolton’s Facebook page.)

Contrary to what Mr. Grigg suggests, I would never deny any law-abiding individual the right to protect themselves.  I don’t care what their beliefs are — if they are law-abiding, they have a God-given right to defend themselves.

But Mr. Grigg should be more careful in how he writes about Islam.  Misunderstanding the murderous nature of the Quran can be a deadly mistake.

Larry Pratt is the Executive Director of Gun Owners of America, a grassroots gun lobby with a million members and activists.

Husband and Wife Tied Up in Violent Home Invasion, Husband Escapes and Gets His Gun…