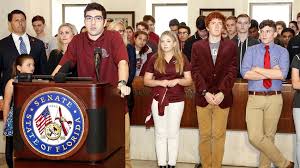 “No one should lose any of their rights without due process. Otherwise, people can make a false claim to get revenge or to disarm the person they’re stalking,” GOA stated.

Even before the Parkland school shooting raised questions about warning signs exhibited by gunman Nikolas Cruz, at least 19 state legislatures were already considering “red flag” bills that would let a court temporarily prohibit someone from possessing or buying firearms if they’re deemed to pose a threat to themselves or others.

Now even more states are considering such laws after the February 14 massacre at Florida’s Marjory Stoneman Douglas High School, which galvanized discussion about them even at a national level and prompted House Democrats propose grants for states that enact them.

Supporters say such measures would fill a gap in current law. Critics say they infringe on due process by letting a judge make an initial decision — even if temporary — without hearing from the accused, and by allowing the judge to curtail someone’s Second Amendment right to bear arms without the respondent ever having committed a crime or been adjudged mentally ill.…

The Gun Owners of America firearms lobbying group points especially to the initial petition hearing, for which the respondent isn’t present. The group warns of false accusations.

“No one should lose any of their rights without due process. Otherwise, people can make a false claim to get revenge or to disarm the person they’re stalking,” the group said in an emailed statement.

“This is very dangerous for all our rights, as it moves us to a ‘Minority Report’ type of society, where one can lose their rights for what they ‘might do’ in the future.”