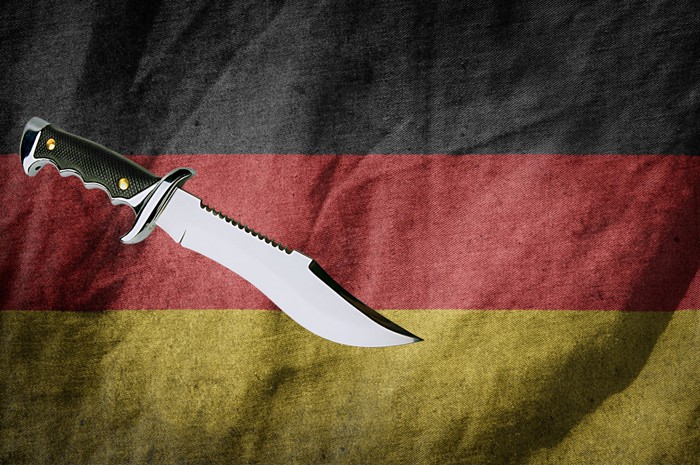 [AWR Hawkins recently noted that, “When guns are prohibited, the man with a knife is king.” And such has been the case in Germany. Knifing attacks are skyrocketing in a country where the gun laws have been described as “among the world’s strictest.” The following bullet points summarize this article.]

A Syrian migrant was stabbed to death in northern Germany by another Syrian because he was eating ice cream during Ramadan. The murder — which occurred in broad daylight in a busy pedestrian shopping area in Oldenburg and caused great consternation among local citizens — is not just the latest example of Sharia law being enforced on German streets. The crime also highlighted the growing epidemic of knife violence in Germany.

Knives, axes and machetes have become weapons of choice for criminals in Germany, which has some of the strictest gun laws in Europe. Knives are not only being used to carry out jihadist attacks, but increasingly to commit homicides, robberies, home invasions, sexual assaults, honor killings and many other kinds of violent crime.

Reliable statistics on knife violence in Germany do not exist. A search of German police blotters, however, shows that during the past ten years the number of knife-related crimes in Germany has increased by more than 1,200%. Around 4,000 such crimes were reported to police in 2016, up from just 300 in 2007….

The surge in knife-related violence in Germany does, however, coincide with Chancellor Angela Merkel’s decision to allow in some two million migrants from Africa, Asia and the Middle East. The number of reported knife crimes in Germany jumped by 600% during the past four years — from about 550 in 2013 to nearly 4,000 in 2016.