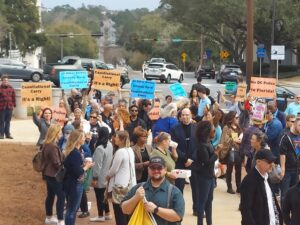 Last week Floridians gathered in front of their State Capitol building and openly exercised their First Amendment rights in an attempt to secure and better their Second Amendment rights.

KrisAnne Hall of the Liberty First Society organized the rally in support of constitutional carry and invited a number of guest speakers to promote freedom. Gun Owners of America was one such group invited and yours truly was there to spread the word about permitless carry in the Sunshine State.

Every time I speak at an event, I am humbled by the number of Floridians who agree and turn out in support of gun rights.

Together, we went into the Capitol and delivered our petitions. First to Gov. DeSantis’ office followed by Sen. Burgess’ office.

The message was simple. We want House Bill 103 (constitutional carry) to be brought up for a vote in the House’s Criminal Justice & Public Safety Subcommittee which is chaired by Rep. Brannan. We want Gov. DeSantis to openly back HB 103 and we want Sen. Burgess, as the Senate’s Judiciary Committee chairman, to introduce a proposed committee bill that mirrors HB 103. Simple right?

We went to Rep. Brannan’s office last. As were were delivering the petitions to his legislative aid, Rep. Brannan stepped out of his office, directly into the crowd of Floridians who want constitutional carry passed.

As soon as he realized what was happening, he cut and ran without answering a simple yes or no question about constitutional carry. It was like Punxsutawney Phil saw his own shadow and ran back into his burrow.

Page 12 of the Republican party’s national platform flat out states that constitutional carry is a party plank. Yet in Florida, a state with a Republican supermajority, the bill isn’t even advancing to be heard and voted on in committee.

However, when you ask them to point out such a rule in the legislature’s procedural rulebook, they can’t. That’s because there is no such requirement. It’s a shell game and nothing more.

I remember Schoolhouse Rock’s I’m Just A Bill and last I checked, the Florida legislature operates under the same system.

If the Republican leadership continues down this path, I wonder how this will affect the GOP in the November elections and, more importantly, in the August primaries. Because a lot of people in Florida are tired of the establishment misleading voters. Gov. DeSantis already alluded to this during the State of the State address.

But, if Gov. DeSantis wants to run in 2024, he need to openly and clearly call for the passage of constitutional carry the same way Georgia Gov. Brian Kemp of Georgia recently did and the same way Texas Gov. Greg Abbott did last year.

Governor DeSantis will be judged on how he stands on the Second Amendment in regards to those other Governors. He has already proven that if he tells the Florida Legislature to jump, they will ask him how high. Now he needs to issue the call.