After it was revealed that the ATF has amassed nearly 1 BILLION records on gun owners, GOA has been several TV and radio interviews from coast to coast.

Here’s one that you can view of GOA Senior Vice President Erich Pratt, who appeared on Fox News with Laura Ingraham last week. 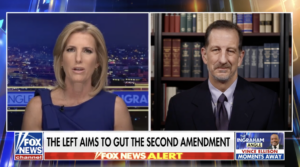 GOA has been highlighting ATF’s illegal registration of gun owners for decades. But last November, we first broke the news that the ATF had processed over 54 million records in just one year (2021) – and we thought that was bad then.

But after teaming up with Rep. Michael Cloud of Texas to launch an investigation into the ATF leak, we forced the ATF to admit that it has compiled 920,664,765 records on gun owners.

This violates the federal prohibition on a national gun registry.

And if the federal government is willing to violate its own laws in order to collect and maintain data on gun owners, what else would they be willing to do?

That’s why Gun Owners of America is fighting back until this gun registry database has been smashed to pieces.

Please make a contribution to our 2A Protection Fund as we lead the fight to dismantle the ATF’s unconstitutional gun registry.

Here’s a screenshot of another one of Pratt’s recent appearances – this one on One America News – where he warned the public about the ATF’s unconstitutional registry. 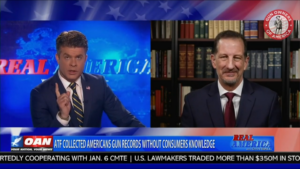 It may seem impossible to win a fight against an unrestrained bureaucracy like the ATF that’s drunk with power and continuously bypasses Congress.

But because we never gave up our battle to hold the ATF accountable, we were able to expose this partial gun registry in the first place.

That’s why GOA will continue to conduct as many interviews across the country as we can to ensure the public fully knows that unelected bureaucrats are illegally collecting records on Americans who are doing nothing but exercising their God-given rights outlined in the Constitution.

We know we will meet resistance along the way. In fact, Chuck Schumer is already patting his ATF buddies on the head by trying to reward them for their lawlessness by DOUBLING their budget to $2.9 BILLION.

That’s right, your hard-earned dollars – that are already losing value every day thanks to Bidenflation – could be used to line the pockets of bureaucrats who are illegally collecting records on you.

This cannot go on. We must stand up and fight for our rights.

So please, make a contribution to our 2A Protection Fund as we lead the fight to dismantle the ATF’s unconstitutional gun registry.