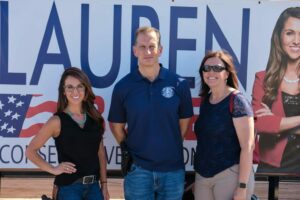 The Lauren Boebert campaign has the endorsement of Gun Owners of America.

The Colorado Times Recorder’s Erik Maulbetsch wrote a poorly sourced article about the Lauren Boebert campaign and her endorsement from Gun Owners of America (GOA).

Maulbetsch tried to paint Gun Owners of America as conspiracy theorists, echoing the Tweets sent by Moms Demand Action and Everytown for Gun Safety. Michael Bloomberg funds both of these anti-gun groups.

In the article, Maulbetsch incorrectly claimed that executive director emeritus of GOA Larry Pratt said the Aurora theater murderer might have been a government agent. AmmoLand News reached out to Maulbetsch to see what the reporter’s source was for the article.

Larry Pratt never claimed that the Aurora murderer was a government agent. Maulbtesch sent AmmoLand News a link (image above) from the Way Back Machine to what he claimed was proof. The link showed an unnamed person from the defunct website, “Special Guest,” commenting on the murderer being a government agent. Someone also posted a quote from Pratt on the site, and Mother Jones decided to tie the two together.

Pratt’s quote read: “The Aurora massacre (once again, in a gun-free zone) is something that those seeking citizen disarmament are using to fuel their drive to ratify the UN treaty on small arms. What disarmament proponents don’t want us to know is that all but one of the mass murders in the U.S. occurred in ‘gun-free zones.’”

The quote that Maulbetsch cited was not Pratt’s quote. Pratt also never posted on Special Guest. His quote was simply used by the website. AmmoLand News tried to follow up with Maulbetsch about the confusion, but the reporter was steadfast in his thinking that since both quotes were on the same page that it was some sort of a smoking gun!?

Maulbetsch said no one pitched him the story, but similar stories have popped up about GOA endorsed candidates referencing the same disproven information from the same sources. All the stories use the same sources as the Tweets by the Bloomberg funded anti-gun groups.

Al Jazeera also attacked Georgia’s 14th congressional district candidate for being endorsed by Gun Owners of America. The Qatari owned media outlet once again shared false allocations about GOA in an attempt to meddle in U.S. Elections. The site claimed that the non-partisan gun-rights group was a “far-right organization.”

With the once powerful National Rifle Association fading, Gun Owners of America and other gun rights groups have stepped up to fill the void. GOA has been effective in getting their message across and fighting against what the group sees as unconstitutional gun laws.

GOA successfully got gun stores, and ranges reopened across the country during the COVID-19 lockdown, including in anti-gun states such as Maryland and Massachusetts. In January, the gun-rights group and the Virginia Citizens Defense League turned out thousands of gun owners to Richmond for the largest gun-rights rally in world history.

GOA has also scored court wins, such as defeating part of Virginia’s universal background check law. The gun-rights group is suing state governments in courts from coast to coast for what it sees as illegal gun laws.

With an explosion of attacks on GOA in the media, some members are wondering if this is a concerted offensive against the organization. The organization’s effectiveness has drawn the attention of gun owners and anti-gun politicians.

“This seems like a desperate attempt from gun control zealots to taint their political opponents,” Pratt said. “Bloomberg’s Everytown organization, and their complicit minions in the Fake News media, lack the arguments to win in the marketplace of ideas, so they throw as much mud as they can in hopes of demonizing their opponents with ad hominem attacks. Quite frankly, it’s a compliment to the great success that GOA members have accomplished over the years. Perhaps that’s why former Sen. Harry Reid called GOA’ worse than bad.’”