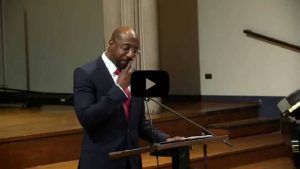 Georgia lawmakers enacted the Safe Carry Protection Act in 2014. Due to the number of attacks in Gun Free Zones, the Safe Carry Protection Act was created to give people The ability to defend themselves and not become soft targets in such places as churches, school zones, and government buildings. The bill passed the Georgia General Assembly, passing the House of Representatives by a vote of 112-58 and the Senate by 37-18.  In typical left-wing fashion, many anti-gun advocates quickly labeled the bill the “Guns Everywhere Bill,” in the hopes of discrediting it and creating a false visual narrative for the irrationally fearful and uninformed anti-gun crowd.

For decades gun owners have tried to help gun grabbing legislators and anti-gun politicians understand the importance of self-defense in public places. Even given countless studies and public events showing guns being used to save lives, Anti-Gunners continue to ignore the truth.

According to a study called Armed Resistance to Crime: The Prevalence and Nature of Self-Defense with a Gun by Florida Criminologist Gary Kleck, potential lives saved by armed law-abiding citizens, exceeds 2 1/2 million per year in America alone.

On November 5, 2017 Stephan Willeford used his AR 15 to stop a heinous attack on Churchgoers at the First Baptist Church in Sutherland Springs, Texas. The gun grabbers used the event to push a white supremacy narrative and continued irrational fear around semi automatic rifles; completely negating the fact that a good guy with a gun saved innocent lives that day.

Jack Wilson, another good guy with a gun, was able to stop an attacker at the West Freeway Church of Christ near Fort Worth, Texas in 2020. If it wasn’t for Mr. Wilson, many more would have likely been killed. The anti-gun crowd used this situation to push for more gun regulations, completely ignoring the fact that it was a good gun that stopped the bad guy.

Consistent with the left-wing anti-gun agenda, Democrat Senate candidate Reverend Raphael Warnock continues to feed the minds of the misinformed, fearful, anti-gun crowd. Ignoring the evidence of guns saving lives in churches, Warnock makes fun of those who believe in self-defense. In a video Warnock said “somebody decided that they had a bright idea to pass a piece of legislation that will allow for guns and concealed weapons to be carried in churches.” It actually was a bright idea but Warnock was being sarcastic. He continued to mock anyone who would carry a gun in church, saying churches are the last place firearms should be allowed.

We often wonder how the anti-gun left can look reality in the face and deny it in support of their political agenda. As the years go by, it becomes clear that politics on the left side of the political spectrum is at the top of the hierarchical list of values; higher than religion and even life itself. The left-wing agenda has consumed many who proclaim religion to be their highest value including Reverand,  Rapheal Warnock who happens to be running for the Senate on January 5th 2020. Mocking those who want to be able to protect themselves, their families and their fellow parishioners may win him points among his Democrat peers, but doesn’t sit well with folks who value life over politics.