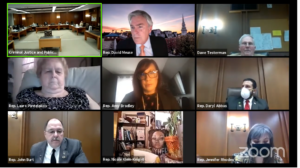 Three bills expanding the use of deadly force in the state turned out opponents in hearings lasting all day before the House Criminal Justice and Public Safety Committee Friday.

People of color testifying said they would be the victims of the bills and argued the bills were not about self-defense but racism, while others said the changes would encourage “bad characters” to be more reckless with their guns.

Kendra Ford, an Exeter minister said people do not make the best choices in a fearful situation.

“This would allow people to shoot others because they feel threatened when there is not actually a threat,” Ford told the committee. “We’ve seen over and over and over in our country black people shot because white people are not comfortable in their presence.”

But supporters said the bill addresses loopholes in current laws which one attorney said is not a true stand-your-ground statute.

Others said the bills expand the fundamental, inalienable right of self-defense to preserve your life and the lives of your loved ones.

“Humans have an inalienable right to self-defense,” said Alan Rice of Bedford, the NH director of Gun Owners of America. “This bill values human life. Those who own and use firearms value human life.”

The other would remove several words in the current law. The change would authorize the use of deadly force when there are safe alternatives to walk away or de-escalate, or when the shooter started the confrontation.

Current law requires a person to first escape or walk away from the confrontation, if possible. That would no longer be the case under House Bill 145.

The third bill expands the use of deadly force inside a home to protect anyone in the dwelling, not just family members and those who live in the House. The committee voted along party lines 11-10 to recommend House Bill 81 pass the entire House…