— GOA thanks its members for sending postcards to Gov. Christie

“I applaud GOA for pushing constitutional carry in the states and concealed carry reciprocity around the country.” — Rep. Marlin Stutzman (R-IN)

GOA thanks its members for sending postcards to Gov. Christie

You may remember the story of Shaneen Allen — a mother of two who is a concealed carry permit holder in Pennsylvania, but who was arrested for having her gun in New Jersey.

Yes, Shaneen broke New Jersey law. But the law she broke is clearly in violation of the Second Amendment, which guarantees citizens the right to keep and BEAR arms.

So GOA snail-mailed its members and provided them postcards addressed to Governor Chris Christie, demanding that he put pressure on the prosecutor to drop the case.

The prosecutor in Atlantic County has relented, and Shaneen Allen will be admitted into a pre-trial intervention (PTI) program. In consequence, she will avoid jail time, a felony conviction, and the destruction of her life.

This is great news!

After all, Shaneen did NOT commit a violent crime. She was extremely cooperative with the arresting officer.  So much so, he never even would have known about Shaneen’s firearm had she not volunteered the information.

Before the decision to keep Shaneen out of jail, Governor Chris Christie had gone on record saying that he was “monitoring” the case and had hinted at an eventual solution, noting that “the pardon power of the governor is broad and extensive.” 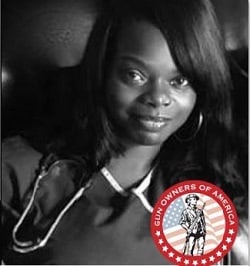 GOA defending the right to carry

Shaneen’s ordeal should be coming to an end soon.  But not so for many other gun owners.  And that’s why Gun Owners of America has pursued a multi-pronged attack to prevent future Shaneen Allens from being persecuted:

* In the courts, GOA and its foundation (GOF) have helped defend the right of gun owners by challenging “may issue” carry laws — all of which are discretionary and discriminatory.

* At the state level, GOA has pushed constitutional carry laws that recognize the right of citizens to carry guns without getting permission from government officials.

* And at the federal level, GOA has lobbied for reciprocity legislation to ensure that people like Shaneen Allen can travel out-of-state without sacrificing their right to protect themselves or their families.

Rep. Marlin Stutzman (R-IN) authored H.R. 578, which is, unquestionably, the best reciprocity bill in the Congress — given that it doesn’t force constitutional carry states to adopt permit systems.

Put another way:  Other reciprocity bills in Congress would force gun owners, in constitutional carry states like Arizona or Vermont, to first get a carry permit before traveling armed into other states.

The beauty of Stutzman’s bill is that it’s constitutional carry-friendly.  His language protects the God-given right to protect oneself while traveling, while honoring federalist principles at the same time.

But until Stutzman’s bill becomes law, gun owners will need to remain vigilant in helping their fellow brothers and sisters in arms who are persecuted by aggressive, unscrupulous prosecutors.

So thank you, once again, to everyone who sent their postcards to Governor Chris Christie.  Your activism makes a difference!