— Great news for gun owners across the country came out of an obscure Georgia runoff last night.

In the 10th Congressional District, Jody Hice handily defeated his opponent and will face nominal opposition in November.

Jody is a great friend of the Second Amendment, and thanks to the support of people like you, GOA was able to flood the airwaves and mailboxes with his pro-gun message.

Georgia’s 10th District had been represented by GOA Life Member Paul Broun, who was chairman of the U.S. House Second Amendment Task Force and a leading voice in protecting your gun rights.  That’s why when Mr. Broun stepped down, it was imperative that we fill his seat with someone who would step in and fight just as vigorously for the right to keep and bear arms. 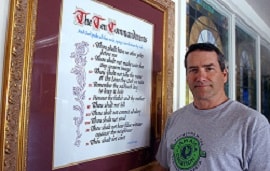 Gun Owners of America was proud to support Jody Hice early on in his race because he is a tireless leader for gun owners in Georgia, and he is more than ready to fight against the gun grabbers in Washington, D.C.

Jody and his wife are both gun owners, and they know that the true meaning of the Second Amendment is not about hunting, but about your God-given right to defend your life from the tyranny of any aggressor.

We need principled individuals like Jody Hice safeguarding liberty in the halls of Congress, and your support of GOA helps to make that happen.

Just by chipping in $10 or $20, you will be part of GOA’s ability to help the best pro-gun candidates across the country.  Because no matter where you live in the country — even if it’s in the deepest of blue states — GOA’s candidates will be looking out for your gun rights.

GOA is making your voice heard this election cycle as we continue to show President Obama and Nancy Pelosi that we are sick and tired of their illegal gun control schemes.

P.S. Jody Hice is prepared to stand up for your Second Amendment rights in Washington. Your contribution of any amount will help GOA to elect ever more candidates who will not compromise on the Second Amendment.