The Anti-gun Left is coming unglued; frustrated by legislative defeats

“Gun Owners of America will run an ad against you or billboard against you and say you’re trying to take their guns away.” — Former President Bill Clinton, appearing on Morning Joe, MSNBC

You might remember that back in June, Barack Obama lamented that his “biggest frustration” as President was not being able to get gun control pushed through the Congress.

Well, the President’s words were like a dog whistle to the anti-gun Left, who are fervently doing their best to attack GOA and NRA — in an effort to discredit our influence on Capitol Hill and amongst the grassroots.

Within the past week, several media outlets joined together with anti-gun billionaire Michael Bloomberg and have leveled their “guns” at the gun lobby and their grassroots members.

And yesterday, an anti-gun Congresswoman even launched a personal attack against GOA’s Larry Pratt.

But as stated by the pro-gun website The Truth About Guns, these “anti-gun articles [about GOA and NRA] are riddled with misinformation, mischaracterization and misdirection.”

The author, Robert Farago, then asks the question:  What should gun owners do in the face of such vitriol? 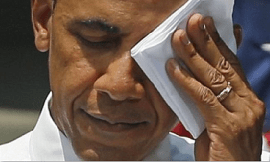 “You can simply ignore it. Every copy of [these magazines] you don’t buy, every click-through you don’t give them, makes them less relevant. And [less] profitable.”

Not only that, Farago says, “Buy a gun, take a newbie to the range and keep your powder dry. Oh and for God’s sake, vote your guns. That’ll learn ‘em!”

Your activism really does make a difference!

Have you ever wondered if your phone calls, emails and postcards make any difference at all?

(You shouldn’t, if you’ve been a member of Gun Owners of America for any length of time, as we frequently document the tremendous impact that our members and activists have made upon the political process.)

But recently, we once again witnessed the power of the grassroots — and the leftists in the Senate are still reeling from their defeat, having failed to pass the so-called “Harry Reid Preservation Act.”

This was a “nothing burger” of a sportsmen’s bill that gets trotted out every two years by Harry Reid in an attempt to help endangered anti-gun Senators in Red States get reelected.

This year’s version was introduced by GOAs F-rated Kay Hagan — and she was joined by 26 Republicans who also cosponsored the bill. But why shouldn’t they?  It was entitled the “sportsmen’s” bill.  Who can be against that, right?

Well, the following two quotes demonstrate how effective your grassroots efforts were in getting former supporters of the bill to end up killing it:

GOA campaign to sink the bill.  “Gun Owners of America [has] blasted the bill as a ‘fake pro-gun’ bill designed to re-elect endangered anti-gun Democrats up in 2014 in pro-gun states.” — Roll Call, July 9, 2014

Republican supporters bail. “All 26 of those Republicans [who initially cosponsored Hagan’s bill] voted on Thursday to filibuster the bill.” — New York Times, July 18, 2014

Your activism makes a difference.  Thanks so much for standing alongside of us! 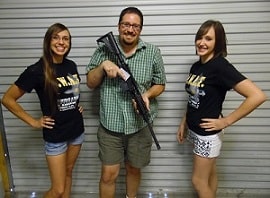 Congratulations go to Alex from Texas, winner of the 2014 Independence Day AR-15 sweepstakes. (See the picture above.)

Alex is a Texas resident who appreciates how easy GOA makes it for gun owners like himself to contact his representatives.

“I’ve gotten GOA’s emails for a long time, and I try to take action on your alerts whenever I can,” Alex said.

Out of the thousands of participants who entered the raffle, Alex was the winner of the S.W.A.T. AR-15 rifle with 1,000 rounds of ammunition.

So if you entered the raffle, but didn’t win, don’t fret — GOA will soon be having and end of summer gun give-a-way. So keep watching your emails — and especially the GOA Facebook page.

URGENT:  If you haven’t “liked” GOA’s Facebook page, please go here right now and do so. Don’t wait any longer, as you are missing very informative articles, critical alerts and gun give-aways!

Finally, David Gilliland, driver of the No. 38 car in the NASCAR Sprint Cup Series, will take the wheel of the Gun Owners of America car in the Super Late Model race at Irwindale Speedway this Saturday, July 19.

Gilliland will be joined by his father Butch (a retired NASCAR driver) and son Todd as three generations of one of southern California’s favorite and best-known racing families will be on the track and competing in the same race for the first time ever!

The GOA car is owned and funded by Tri-Signal Motor Sports.  Dennis Furden, owner/driver of Tri-Signal Motor Sports, is an avid Second Amendment supporter who started his racing career in 1972 at the age of 11. He has competed and won more than 100 races in his 40 plus years of driving.  He has competed at various levels and recently finished 6th place in points in the NASCAR Whelan All American Series Super Late Model division.

Right to arms isn’t only freedom ‘progressives’ want to eviscerate