GOA today chided Rep. Carolyn Maloney (D-NY) for her utter hypocrisy — and lack of understanding — regarding our key historical documents, like the Federalist Papers.

Rep. Maloney has called for Capitol Hill law enforcement to investigate GOA Executive Director Larry Pratt for saying that the Second Amendment is “for restraining tyrannical tendencies in government … especially those in the liberal, tyrannical end of the spectrum.” 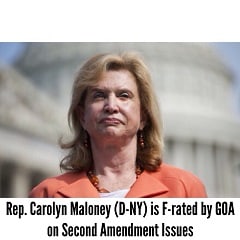 Maloney then falsely claims that Pratt was “glad” about actual threats that were made against her personally.

All of this stems from the recent hit piece by Rolling Stone on Second Amendment groups — an edition which has prompted pro-gun websites, like The Truth About Guns, to describe the articles about GOA and NRA as being “riddled with misinformation, mischaracterization and misdirection.”

To state the obvious, GOA’s Executive Director Larry Pratt has NEVER called for violence against the U.S. government — including any Representative or Senator.

GOA has published thousands upon thousands of essays on the subject of the Second Amendment, and the best Rolling Stone can do is to claim that Pratt is somehow instigating violence against a Congresswoman from New York? Shame on them for their ignorance and hypocrisy.

Ignorance, because they fail to understand our founding documents.  What GOA has advocated — which is what the Founding Fathers stated and is what they printed in the Federalist Papers — is that our freedoms which are protected by the Second Amendment are the final guarantee against a tyrannical government:

* “If the representatives of the people betray their constituents, there is then no recourse left but in the exertion of that original right of self-defense which is paramount to all positive forms of government, and which against the usurpations of the national rulers may be exerted ….”  — Alexander Hamilton, Federalist No. 28

* “[The Constitution preserves] the advantage of being armed which Americans possess over the people of almost every other nation [where] the governments are afraid to trust the people with arms.” — James Madison, Federalist No. 46

But there is also tremendous hypocrisy in this latest attack against GOA.  If Rolling Stone and Rep. Maloney want to target and investigate REAL examples of threatened violence, then they should start by looking amongst their supporters on the Left.

* Or how about inflammatory, violent language against women? “So, Michele [Bachmann], slit your wrist! Go ahead! I mean, you know, why not? I mean, if you want to — or, you know, do us all a better thing. Move that knife up about two feet. I mean, start right at the collarbone.” (Talk show host Montel Williams)

* Or how about threatening violence against a former Vice President?  “You’re damn right, Dick Cheney’s heart’s a political football.  We ought to rip it out and kick it around and stuff it back in him.”  (MSNBC Talk Show Host Ed Schultz)

* Or how about suggesting a firing squad?  “Instead of running for governor of Florida, they ought to put him [Gov. Scott] against a wall and shoot him.” (Former Democratic Rep. Paul Kanjorski)

* And, of course, who can forget this one from President Obama himself:  “If they bring a knife to the fight, we bring a gun.” And, “We’re going to punish our enemies and we’re gonna reward our friends….”

One final point.  Rep. Maloney says Larry Pratt’s comments are “reprehensible in light of what happened to my good friend Congresswoman Gabby Giffords.”  She is right in that what happened to Rep. Giffords was reprehensible.  But what she chooses to hide from the public is that Giffords was not shot by a conservative activist, but rather by a radical who was a fan of the Communist Manifesto and Mein Kampf.  Hardly a right-winger.

The Left clearly has a double standard.  They excuse their own outbursts of vitriol, but then go apoplectic when the Right hearkens back to statements made by our Founding Fathers.

Erich Pratt is the Director of Communications for Gun Owners of America, a grassroots gun lobby made up of over 500,000 members and activists.

The Anti-gun Left is coming unglued; frustrated by legislative defeats