Today is the day!  GOA Executive Director Larry Pratt plays a cameo role in a movie that opens up in selected theaters across the country.

The movie is A Long Way Off, which is a 21st century version of the Prodigal Son story.  After getting beaten up, the Prodigal goes to Larry’s Gun Store to get a gun.

Larry Pratt is one of several celebrities in the movie. 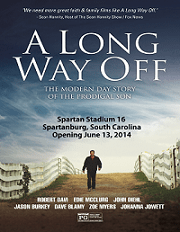 “To further attract an expanded audience,” says WorldNetDaily, the movie “effectively integrate[s] non-actors actually playing themselves, including Larry Pratt of Gun Owners of America (who appeared as a guest with Piers Morgan multiple times) playing himself as an owner of Larry’s Gun Shop.”

Other celebrity “non-actors” include Sean Hannity and Scott Rasmussen.

Gun Owners of America filed an amicus brief in the U.S. Court of Appeals for the Second Circuit in late May, challenging the draconian Connecticut gun ban.

The Connecticut law — now infamous for making criminals out of hundreds of thousands of otherwise law-abiding citizens who have refused to register their weapons — bans so-called “assault weapons” and “large capacity magazines.” 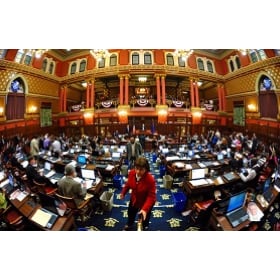 In court, the district judge bought the old, tired arguments that the ban is necessary to protect the police and further public safety. Despite finding that the ban “substantially burdened” the Second Amendment right to keep and bear arms, he felt the burden was not unreasonable in light of the competing public interest.

Never mind that these arguments were rejected by the U.S. Supreme Court in the DC v. Heller case.  As such, the district court used a judge-empowering “balancing test” to justify the ban.

But GOA’s brief argues, among other things, that the judicial standard of review for Second Amendment cases is the amendment’s text itself — “shall not be infringed.”

And please help support our efforts to continue bringing cases like this one.

The battle in Texas is heating up over open carry, as residents continue to protest state law which still does NOT allow individuals to carry handguns openly.

Memo to gun-control advocates: Even Elliot Rodger believed guns would have deterred him