Gun Owners of America has come out in strong support of efforts by Texas gun owners to combat anti-gun bigotry by exercising their rights to carry openly in public.

The Executive Director of GOA told the Wall Street Journal:  “I see open carry as a positive thing…”

Pratt went on to say that gun owners should “consider what’s the most effective way to educate the public.”  And, although open carry may not be every gun owner’s “cup of tea,” we believe that open carry by those so inclined is a desirable — and necessary — means for combating the liberal media’s efforts to make Americans terrified of firearms. 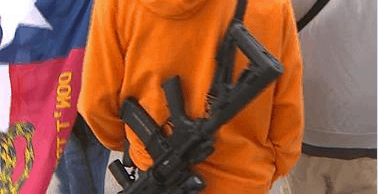 GOA Legislative Counsel Michael E. Hammond made this even clearer in a June 3 interview with CBS Radio News, inviting Texas open carry advocates to join GOA — after many felt they had been repudiated by another Second Amendment group.

On its website, KLRD radio quoted GOA’s Hammond as saying, “We are fighting a war of perception, and if gun owners allow themselves to be subdued by the narrative that guns are bad, guns are evil, we need to hide guns, then we are only going to see the Second Amendment suffer more.”

Incredibly the Wall Street Journal article quoting Mr. Pratt mischaracterized his remarks, in order to shore up the article’s attack on “open carry.”  But the quote is clear:  Open carry, if gun owners comply with the law, is both desirable and necessary for combating the media’s efforts to demonize guns and make Americans fear them.

Also, almost all news reports ignore the reason why the Texans are carrying rifles instead of handguns.  The fact is, Texas is one of only a handful of states to prohibit the open carry of handguns, a law the pro-gun activists are trying to get changed through their lawful, peaceful actions.

Of course, leading the bigots’ parade against guns is, not surprisingly, MSNBC.  Joy Reid, an MSNBC commentator, grilled a Texas “open carry” leader about whether his guns didn’t make Texans uncomfortable.  How ironic that Reid, who is a black American, would make such an argument.  In the 1950’s and 1960’s, black Americans, who were sitting in Southern restaurants in support of civil rights, also made some customers uncomfortable.

So should the rights of Americans to exercise their legal prerogatives to promote civil and constitutional rights be thwarted if bigoted, cowardly people — fueled by a psychotic media rank — are “offended” by those rights?  Is that the new standard by which our rights should be screened?

We don’t think so.