“What is wrong with the people here in this country?” asked anti-gun Senator Barbara Boxer on the floor of the Senate Monday.

Boxer was questioning why even the anti-gun Senate had not heeded her call for more gun bans, and concluded that something was wrong with America.

Well, here’s an idea, Senator Boxer:  Nothing’s wrong with America. But something is wrong with you.

And, in particular, something’s wrong with your state of California, which registers guns, bans many semi-automatics, has a $24 million gun confiscation program to send SWAT teams to people’s homes, and is rated by the anti-gun Brady Campaign as having the strictest gun control laws in the nation — and yet was unable to prevent another massacre of school kids on May 23. 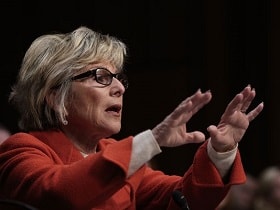 It probably won’t surprise you that Sen. Boxer doesn’t blame this massacre on the fact that California left all of the victims as unarmed “sitting ducks.”

Or that even the New York Times now realizes that its sensationalist coverage has created these copycat killings.

Or that it’s the CRIMINAL who is actually at fault!

No.  Boxer instead concluded that this was another opportunity for her to exploit a tragedy for political gain.  And that’s exactly what she has done.

The text of Boxer’s hilariously-named “Pause for Safety Act” was not available at press time.  But, by her own definition, it would allow a universe of people which could include virtually anyone (for instance, “co-workers,” according to Boxer) to sue to take your guns away.

After the lawsuit is commenced, you would have to take thousands of dollars (which, presumably, you have lying around the house) and hire a lawyer to resist that petition.  Of course, if you didn’t have the money to hire a lawyer, your constitutional rights vanish in thin air.

Gun Owners of America has had lots of experience with the far-less-expansive restraining order gun ban added to the “prohibited persons list” in 18 U.S.C. 922(d) and (g).

Constantly — and we mean constantly — we receive e-mails from innocent law-abiding members who cannot afford the cost of resisting a petition to take their guns away.  Constantly, we see the impact of “he-said she-said” reciprocal gun-ban petitions which are the inevitable outcome of failed relationships which are increasingly common in America.

So, yes, Senator Boxer:  We understand what you’re up to.  If the Boxer bill were to become law, virtually anyone could lose their guns at any time because someone with “deep pockets” didn’t like them.

But the good news is that Boxer’s proposal is so transparently anti-gun and so odious that we can nip it in the bud if we act now.

Larry Pratt has a cameo appearance in the movie, A Long Way Off.  It is a 21st century version of the Prodigal Son.  After getting beaten up, the Prodigal goes to Larry’s Gun Store to get a gun.