Take Action below to urge your Republican Senator, who sits on the Judiciary Committee, to OPPOSE red flag gun confiscation orders. This action will only work for the Republican Senators from IA, ID, LA, MO, NC, NE, SC, TN, TX and UT.

Judiciary Committee to Hold Hearings in Favor of Gun Confiscation

If your Republican Senator sits on the powerful Judiciary Committee, he or she has the power to make Gun Confiscation Orders DOA in Congress. 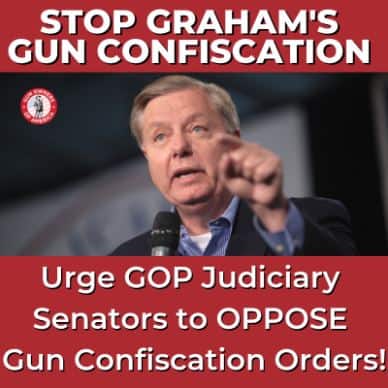 As GOA has notified you already, Judiciary Committee Chairman Lindsey Graham has scheduled a hearing on Gun Confiscation Orders on March 26.

And any Republican Senator, who sits on the powerful Judiciary Committee, will be the deciding vote as to whether this bill gets voted out of committee and gets sent to the floor!

Here are the Republican members of the Senate Judiciary Committee:

It is imperative that you contact your Senator on this list immediately — and urge opposition to these horrendous Gun Confiscation Orders.

GOA has already detailed many of the problems with the red flag gun grab bills in Congress.

But the problems just don’t end there.

The red flag gun grab bills in the Senate (S. 7 and S. 506) take tax dollars from the red states and send them to New York, Massachusetts, New Jersey, Maryland, Illinois, and California.

In other words, these bills would reward the 14 states that have “red flag” GUN CONFISCATION programs in place already.

To be clear, the bill’s theoretically unlimited pot of money would go only to the 14 states that have these Michael Bloomberg-promoted Gun Confiscation programs.

Virtually all of these are the bluest, most anti-gun states in the country.

And unless your state wants to enact the most anti-gun, repressive, unconstitutional part of billionaire Mike Bloomberg’s gun control agenda, it won’t get a penny!

So please send a special message to your Senator (above), encouraging a NO vote in the Senate Judiciary Committee.

Even foolish senators understand that you can’t raid someone’s home and take away their guns in the middle of the night without a hearing — particularly when the person has committed NO CRIME and is not reasonably expected TO EVER COMMIT A CRIME.

That would run into a little problem with the Constitution.

So anti-gunner Senators like Richard Blumenthal (D-CT), Graham, etc., are thinking about amending the red flag bills in Congress to require “front-end due process” — whatever that means.

But there’s only one problem with this: Every one of the 14 states that has enacted Gun Confiscation Orders does NOT have “front-end due process.”

Not a single one of them.

This is how insane the legislative process is becoming. But it makes no difference. Anti-gunners just want to pass something in order to put “points on the board.”

And if you would like to read our Daily Caller article on this subject, please go here.

Finally, please consider making a donation to Gun Owners of America to double your impact for the Second Amendment.