Take Action below to urge your U.S. Senators to OPPOSE red flag gun confiscation orders.  And you can scroll to the bottom of this alert to call them.

Let’s Generate a Massive Outcry Against Gun Confiscation Orders in the Senate!

It’s been said quite often that Republicans are the “Stupid Party.” 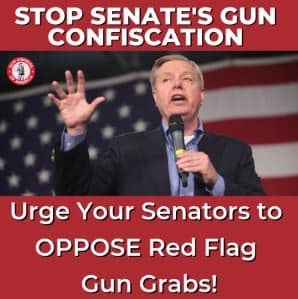 Well, the party of stupid has struck again, and “Exhibit A” is the Republican Chairman of the Senate Judiciary Committee — Senator Lindsey Graham of South Carolina.

Based on what Graham is doing, one would think he’s planning to forfeit control of the Senate to the Democrats and to lose the White House in 2020.  Because he is holding a hearing to promote the nastiest form of Bloomberg-sponsored gun control.

As it turns out, Graham and his new “best buddy,” anti-gun zealot Senator Richard Blumenthal (D-CT), are scheduling a hearing on Gun Confiscation Orders — sugar-coated as “red-flag laws” — on March 26 of this month.

They would allow an angry relative or the police to make a telephone call to a judge. And, based on that telephone call, the judge can issue an order stripping you of your Second, Fourth, Fifth, and Fourteenth Amendment rights — all without your knowledge.

The first thing you would learn about it is when the SWAT Team arrived at your door in the middle of the night — ready to ransack your home and, if you resisted, to arrest or shoot you.

Let’s make one thing perfectly clear:  Gun Confiscation Orders would not have stopped ANY mass shooting in American history — and they do NOTHING to reduce homicides, suicides, crime, or mass shootings.

Gun Confiscation “red-flag” laws have been proven to be ineffective:

He found that red flag laws have been an utter failure when it comes to lowering crime rates:

So if red flag laws don’t make people safer, what are they good for?  In short, they are just another effort by gun-hater Bloomberg to “put points on the board.”

To date, only two key Senate bills imposing Gun Confiscation Orders have been introduced (S. 7 and S. 506). But more such bills are expected.

So now is the time to contact the Senate and demand that they oppose this dangerous legislation.  You can email them ABOVE and call them BELOW.

And if you want to renew your GOA membership or join for the first time, please click here.