But Rubio’s proposal could serve as a poison pill

“Congress is moving closer to [passing] a bill which would require virtually every single American to buy government-approved health insurance, whether they wanted it or not.  And, in the process, that bill would feed all of your most confidential medical data into an enormous database, which could be used to take away your guns.” — GOA Alert, April 2009

Five years ago, during the spring of 2009, GOA told its members that a major priority of Barack Obama’s health care reform agenda was to take away your guns.

This was three months before other groups and media outlets came out in opposition of what became known as “ObamaCare.”  At the time, Republican Senators like Chuck Grassley and Orrin Hatch were working hard to solidify a bipartisan consensus which would take the issue of “health care reform” off the table.

Conservative pollsters were saying that opposition to health care reform would destroy the Republican Party. 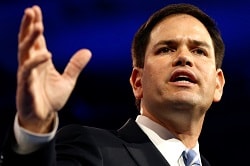 At the time, GOA said that Obama’s health care reform would allow the ATF to troll a federal health database for tens of millions of people — individuals suffering from maladies like PTSD, ADHD or post-partum depression — and to send those names to the FBI’s NICS system.

Spring forward to January, 2013, when President Obama published an Executive Action concerning language that was inserted into ObamaCare in a futile effort to appease GOA.  Obama’s Executive Action overturned a clear protection for gun owners and declared that doctors are not prohibited from asking about guns and entering that information in a federal database.

Then in January of this year, the Department of Health and Human Services floated regulations which would waive federal privacy laws to allow these gun owners’ names to be submitted to the NICS system.

At the same time, states like New York are turning in the names of New Yorkers, for no other reason that their psychiatrists have given them prescriptions for anxiety medication.  Even in pro-gun states like New Hampshire, there are pro-gun groups that (in an effort to compromise) are pushing legislation to send the names of many gun owners who have visited psychiatrists to NICS — thus, imposing gun bans on a lot more people.

The anti-gun Left is pulling out the stops to save ObamaCare, because this law helps fund much of their socialistic agenda — including the culling of gun owners’ names.  But if ObamaCare isn’t destroyed, the Second Amendment will be in grave jeopardy.

Realizing this, Senator Marco Rubio has crafted a legislative proposal (S. 1726) which would repeal Obama’s ability to spend $1 trillion to buy off “millionaires and billionaires” at wealthy insurance companies.

Sen. Rubio is trying to repeal this bailout since its only purpose is to keep the anti-gun ObamaCare law afloat through the 2014 elections.

The quickest way to put a stake through the heart of this ObamaCare vampire is to pass the Rubio proposal.  Once insurance companies are no longer engaged in a conspiracy of silence on behalf of ObamaCare — because they realize Obama will no longer pay them $1 trillion of “hush money” — ObamaCare collapses.

ACTION: Contact your Senators. Ask them to cosponsor Senator Rubio’s S. 1726 — a bill that will help the anti-gun ObamaCare law to implode by repealing the bailout of millionaires and billionaires in the insurance companies.