The House Republican leadership will soon announce a set of “principles” for immigration reform.  Supposedly, if these “principles” are not well-received, the House will shelve the issue for the remainder of the year.

To be blunt:  The health of the Second Amendment relies on demolishing these “principles.”

Immigration reform will add over 8,000,000 anti-gun voters to the voting rolls.  There may be as many as 11.5 million persons illegally in the United States.  And, a Pew poll from last year indicated that if illegal immigrants were given citizenship, they would vote for liberal, anti-gun candidates by an 8-to-1 margin.

This is exactly what happened to California — which was once a Red State.  Because of the Simpson-Mazzoli amnesty bill of 1986, the state lurched violently to the left and now can’t pass gun control restrictions fast enough. 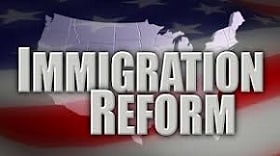 If this were to happen at the national level, we would lose the ability to stop massive gun bans and gun registration schemes.  And all of this occurs at a time when a Fox poll shows the American people oppose Obama’s immigration policies by a margin of 36% to 54%.

The first reality is this:  If the House passes ANYTHING, the Senate will tack on its amnesty bill and send it to conference.  And the national conversation will turn off of ObamaCare and onto immigration.

They will have created the biggest and most motivated Obama-loving movement in the country — devoted to electing anti-gun politicians and retaining Harry Reid’s control of the Senate.

What will Republicans get, in exchange for creating an army of pro-Obama election warriors?

A secure border?  The leadership’s “principles” will embrace the myth that Obama can be trusted to “secure the borders” if Republicans create 8,000,000 new Obama voters.  But it should tell you something that Democrats have steadfastly refused to condition amnesty on measurable border progress, determined by an objective arbiter.

If the anti-gun ObamaCare law has shown us anything, it is that the law is irrelevant to Barack Obama, when it impedes his political objectives.  You would have to be delusional to assume that Obama will do anything to secure the border, once his “quid pro quo” is firmly in hand.

What about E-Verify (also known as “Healthcare.gov for Jobs”)?

The only difference between healthcare.gov and E-Verify is that (1) E-Verify is a much larger and more intrusive database and, (2) the consequences of its failure will be much more cataclysmic.  Incidentally, even a maid, nanny, or baby sitter would have to receive government approval if the Senate bill became law.

What about the kids?  As we saw when they chanted Obama’s campaign slogan, “Yes we can,” from the Senate gallery, this is the most rabidly political demographic of all.  Obama has made sure that these supporters will not be deported.

But as pro-gun senators found out after the defeat of the Manchin-Toomey gun control amendment in April, these rabid “Obamaistas” will make their lives miserable.  If all doubt about future deportation is removed, no Republican congressman can expect to ever again enjoy a peaceful town hall meeting (or breakfast at a local diner), but they will find these activists being bused around the country to cower conservative legislators into supporting the entire agenda of the Left — including gun control!

There is one final benefit for Obama in cowing the House to bring up immigration, and it is perhaps the most important consideration of all:  Once the House falls into Obama’s “immigration trap,” it takes attention away from the collapsing, anti-gun ObamaCare program and changes the national conversation to another issue.

The bottom line:  There is a reason why Barack Obama and his “puppet press” have been campaigning for a year to force the Republican House to wade into “immigration reform.”  It is nothing but benefits for anti-gun politicians, and nothing but pain for pro-gun legislators.

Who would be stupid enough to inflict that level of pain on themselves?