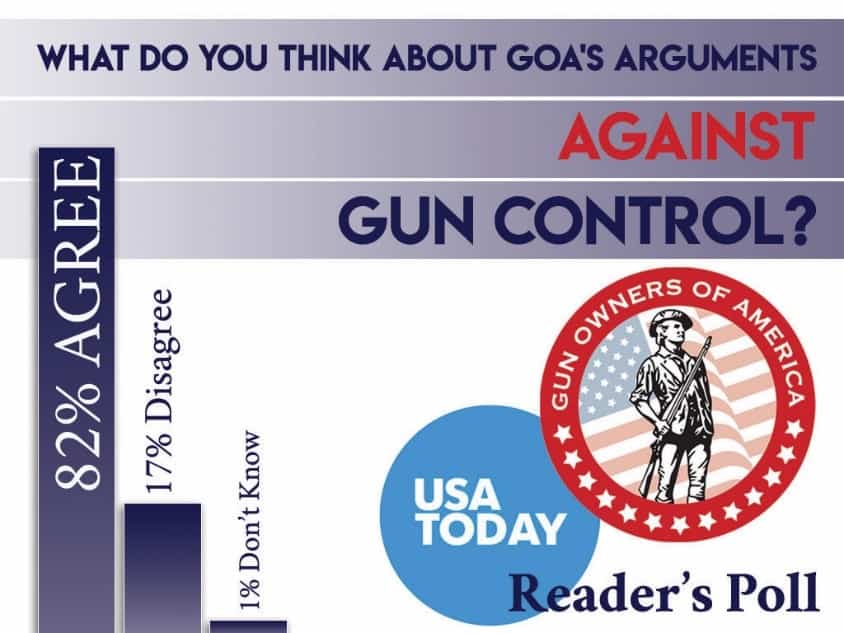 Yesterday, I emailed you with headlines about the anti-gunners plans for next year.

The gun grabbers are now emboldened because of their recent electoral victories.

They plan to whip up media support for their gun control agenda and intimidate Republicans into supporting it.

But GOA is fighting back.

Just recently, I wrote the opposing opinion editorial in USA Today — one of the nation’s three largest papers with a reach of 7 million daily readers.

I wrote the article in response to the recent California shooting, which tragically, took 12 lives.

The feedback from this article has been incredible.

One reader emailed me to say, “Your article in today’s USA Today was spot on. I appreciate you speaking in facts and not opinions. I hope and pray many will read this debate and see the wisdom in your words.”

Other writers made similar comments.

In fact, as I write this, more than 80% of USA Today readers taking the poll say that AGREE with the position of my article.

And for that, I want to thank you. At GOA, we can’t engage the culture and combat the anti-gunners without your assistance.

GOA is waging the battle to transform minds in the high schools … in colleges … in the media … and anywhere else that we can get a platform.

I was speaking to a group of college-age students recently, and one youth told me afterwards:

“It was the first time I heard in detail all the strong arguments against gun control.”

Imagine that, because grassroots members like you are keeping GOA on the frontlines, students are hearing the other side of the argument FOR THE FIRST TIME!

Another student told me:

“I particularly enjoyed hearing your historical evidence as to the importance of not allowing governments to take away the people’s right to bear arms.”

As you know, this is the ultimate reason we own firearms. How great it is that these students are being presented with this information during their very formative years in college.

Another student, who lives behind “enemy lines” in New Jersey, wrote to me, saying:

“I really enjoyed your insightful discussion about how the Second Amendment, specifically the words ‘shall not be infringed,’ were written to establish the right to bear arms as an uncompromising right.”

These students, plus many more, are getting the truth via Gun Owners of America.

And again, it’s with your help that this is taking place. Thank you for helping keep GOA on the frontlines with your activism and support.

P.S. Thank you for keeping GOA on the frontlines. So if you have let your GOA membership expire, make sure to renew your membership in Gun Owners of America today for only $20!