Ryan Inching Closer to Throwing His Hat in the Ring

ACTION: Click here to email your Representative. Urge him or her to oppose Paul Ryan for House Speaker.

Ryan is a Bad Choice for Gun Rights

It looks like Paul Ryan is strongly considering the House Speaker position.

But this would be a disaster for pro-gun Americans.

As I warned you in a previous alert, Rep. Paul Ryan is pro-amnesty (giving the franchise to millions of anti-gun voters), and he has a record of compromising gun rights.

For example, Ryan voted for the Thompson-King amendment last year — an anti-gun amendment that would add an additional $19.5 million to pay states to turn in more names to the federal gun-ban (NICS) list.

More names into the NICS system? You mean like adding more law-abiding veterans and senior citizens? 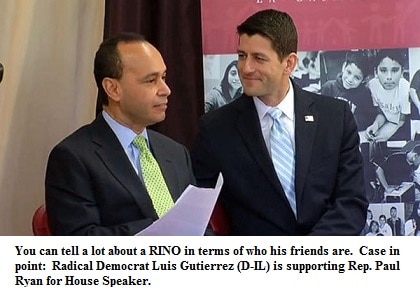 These Americans have done nothing wrong, other than choosing to live in a country that wants to strip them of their constitutional rights, merely because they’ve consulted a psychiatrist or are suffering from typical ailments related to old age.

If all of this were not bad enough, Erick Erickson of Red State reports that Paul Ryan wants to become more of a king than a House Speaker:

Paul Ryan has conditions to become Speaker of the House. One of those conditions is that the House of Representatives gut the ability to remove a future Speaker.

You read that right. Paul Ryan wants the House of Representatives to neuter the ability of a majority to replace the Speaker of the House.

It would be political suicide for House conservatives to agree to this, as it will only consolidate power in the hands of the Republican establishment:

If they go along with Paul Ryan, they will sign their own death warrant at the hands of Paul Ryan’s loyal lieutenants. Remember, Ryan has not even denounced the Chamber of Commerce and John Boehner’s outside PAC who together are trying to purge the House of conservatives.

Some of you have asked us: If not Paul Ryan, then whom?

Well, there are a few Republicans — whom GOA can support — who are still considering a run for Speaker. But at this time, it would be premature to give out their names, until they officially announce.

Most of them are waiting to see whether Ryan chooses to run.

For now, we need to let Representatives know that it would be a BIG MISTAKE to elect a compromising House Speaker who was dominated by “Uncle Joe” Biden in the Vice Presidential debate three years ago.

Besides, how good can Ryan be if radical Democrat Luis Gutierrez (D-IL) — along with Representative John Boehner and Sen. John McCain — are supporting Ryan’s candidacy for Speaker?

Please email your Representative today and urge him or her to oppose Paul Ryan for Speaker.

Police: Burglar Strips Naked, Gets in Bed with Couple, Dodges Bullets While Fleeing