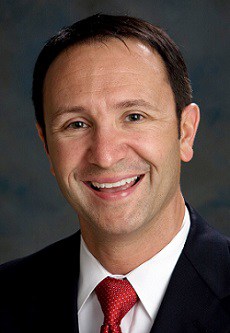 “The choice could not have been more clear,” GOA Chairman Tim Macy stated. “In Congress, Jeff earned a 100 percent GOA rating, and only the best of the best earn 100 percent. Time and time again, Jeff Landry has gone above and beyond the call of duty to preserve and restore gun rights.”

The differences are glaring between Landry and anti-gun incumbent and former Democrat Buddy Caldwell, who pulled an Arlen Specter and switched parties to improve his chances of re-election.

“Let’s not forget the company Caldwell keeps,” Macy said. “We will never forget his unwavering support of Mary Landrieu. He is still working to elect other gun-grabbers, like State Rep. Barbara Norton, who boasted in a public House hearing ‘I am doing everything I can to keep guns out of the people’s hands.’

“Caldwell is so anti-gun, and Landry so pro-gun,” Macy continued, “that the Louisiana Republican Party recently endorsed Landry over the incumbent Caldwell.”

“Buddy Caldwell switched parties to save his re-election. We can’t let gun-grabbers control the attorney general’s office. We would literally be giving them the handcuffs and jail cells to target gun owners,” Macy said.

Ryan Inching Closer to Throwing His Hat in the Ring