Click on the Take Action button to see how your congressmen are rated on 2nd Amendment issues.  And forward this email to other pro-gun family and friends to help spread the word! 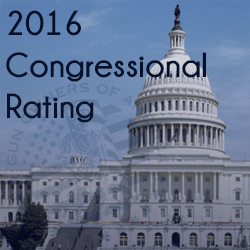 You hear the same thing every election year.

“This is the most important election of our lifetimes,” is usually followed by “so please send money.”

Hyperbole aside, gun owners have a lot at stake in this election.

Unfortunately, it is estimated that in a typical election, 30-40% of gun owners don’t bother to vote.

But this isn’t the year to skip the ballot box.

That’s why Gun Owners of America published this Congressional Rating – to help gun owners determine the best candidates on the Second Amendment.

Contribute $10 or $20 to help Gun Owners of America get the Congressional Rating into as many pro-gun hands as possible.

At the presidential level, the differences between Donald Trump and Hillary Clinton are stark.

Hillary makes no bones about gun control being a centerpiece of her campaign.

For instance, when asked about the Australian mandatory government buyback program in which almost a million privately owned firearms were collected and destroyed, Hillary praised the laws from Down Under and said, “I think it’s worth considering.”

Hillary would also shift the Supreme Court dramatically to the Left—and the Second Amendment would be her litmus test.

Clinton told supporters that, “The Supreme Court is wrong on the Second Amendment, and I am going to make that case every chance I get.”

It is estimated that 30-40% of gun owners don’t vote in any given election. This is not the year to stay home!

Trump also spoke out against gun-free zones, calling them “target practice for the sickos and for the mentally ill.”

He supports concealed carry, telling CNN that, “the right of self-defense doesn’t stop at the end of your driveway.”

And he has pledged to undo Obama’s anti-gun executive actions. Hillary thinks those orders should have gone farther.

Unfortunately, Trump, like Clinton, supports taking away Second Amendment rights — without due process — from people on a secret government watch list.

Johnson’s running mate, former governor Bill Weld, is rated F- by GOA due to his efforts in Massachusetts to pass some of the strictest gun control laws in the country.

Senate Up For Grabs

There is also a fierce fight for control of the U.S. Senate this year, with the electoral map working in favor of the Democrats.

Republicans are defending twenty-four seats, and at least seven of those are competitive.

Senate Democrats have only ten seats on the ballot, and just two are competitive.

With the Senate split 54-46 in favor of Republicans, Democrats need to pick up five seats to take control of that chamber—and just four if Hillary is elected, as the Vice President serves as the tiebreaking vote.

Contribute $10 or $20 to help Gun Owners of America get the Congressional Rating into as many pro-gun hands as possible.

Can Democrats Take Control of the U.S. House?

House Republicans enjoy a sixty seat advantage over Democrats, so it’s a tough hill to climb for Democrats to take control of that chamber.

Nevertheless, they are making a strong play to pick up House seats with support from major donors like billionaire George Soros.  While it’s not likely Democrats will win the House, if there’s a strong shift toward Hillary in the final weeks before the election, anything can happen.

And even though Gun Owners of America has had bitter disagreements with Republican leadership over their handling of the gun issue, one-party control of two of the three branches of government can be disastrous.

Consider that the last time Democrats controlled the White House and both chambers of Congress, they passed the anti-gun ObamaCare law.

The time before that, they passed the Brady law and the ban on semi-automatic firearms.

Although the semi-auto ban expired after ten years, other aspects of the 1994 Crime Bill remain in effect.

Whether or not this is “the most important election in our lifetimes,” the bottom line is there’s a lot at stake and it’s crucial that the nearly one hundred million gun owners get out to vote this November.

P.S.  Gun Owners of America has published its 2016 Congressional Vote Rating. Please go here to view it, and forward this email to your pro-gun family and friends. Finally, any contribution you can give — $5, $10 or $20 or more — will help us spread the word even more!

5 Ways the Next Congress Can Protect Gun Rights