Will Congress Stop the Obama Administration from Disarming our Military Veterans?

We just celebrated Independence Day last week. From that initial struggle against the British to the present day, we have honored our military veterans for their courageous sacrifice in helping keep us free.

Sadly, many of these veterans have recently seen their courage “rewarded” with a gun ban. And this concerns all gun owners, because what is happening to veterans through the VA can happen to you someday through ObamaCare. 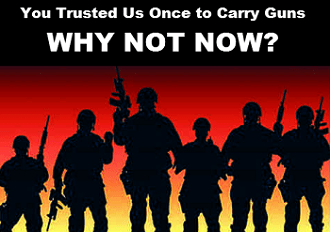 But the problem with military veterans is not new. For nearly twenty years, GOA has been telling you about the anti-gun atrocities being performed by the Department of Veterans Affairs (VA) and the Justice Department against law-abiding veterans.

The idea was hatched during the Clinton administration. And it works like this:

* When a veteran, as a result of a traumatic experience abroad, seeks disability benefits and/or counseling, VA moves to appoint a guardian to manage his financial affairs.

* Under illegitimate Clinton interpretations by ATF, this “inability to handle his financial affairs” would make the veteran “mentally defective” under 18 U.S.C. 922 (g) (4), and hence legally barred from owning a gun or ammunition.

You can see a copy of the letter that the VA sends to law-abiding veterans by clicking here.

Unfortunately, another gun group worked with anti-gun Senator Chuck Schumer in 2007 and 2008 to pass the Veterans Disarmament Act, which codified these unlawful actions into statutory law.

WorldNetDaily reported recently that people who live with veterans are now being ordered not to possess a gun, and some veterans are being told they can “buy back” their gun rights by forgoing their VA benefits.

In essence, the VA is saying that if veterans want to give up all of their benefits, then there are no longer grounds for going after their guns. Gee, what a deal, right?

One veteran, who is an attorney and who has studied this problem closely, said “this is illegal and is called extortion.”

Currently, there could be as many as 200,000 military veterans who have been affected by this gun ban. It’s time to do something about it.

Shortly, the Senate will consider funding for both of these bureaucracies. If any Senator wants to propose it, he can use the congressional “power of the purse” and offer an amendment to “defund” the government’s ability to strip veterans of their Second Amendment rights.

We expect the House and the Senate may be tied up in an impasse over all the appropriations bills. But by getting our foot in the door, we make it easier to get this “defunding” language added to the continuing resolution which will ultimately fund the government.

ACTION: Contact your Senators. Ask them to reject any Veterans Affairs or Justice Department appropriations bills which does not protect the Second Amendment rights of veterans.

NOTE: The House passed bills are H.R. 2029 (Veterans Affairs) and H.R. 2578 (Dept. of Justice). But please keep in mind that the Senate can either take up these bills or assign them new numbers without much prior warning.