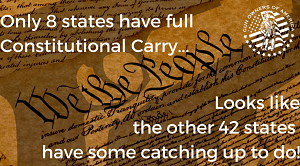 According to the Associated Press:

“Republican Gov. Paul LePage signed a bill on Wednesday that will make Maine one of a handful of states where residents are free to carry a hidden firearm without a permit.

“The bill’s success is a huge victory for gun-rights advocates who have long fought to get rid of the concealed handgun permit requirement, which they say doesn’t do anything to make the public safer.

“‘It really is a historic day in the state of Maine that this common-sense measure is finally signed into law,’ said Sen. Eric Brakey, the Republican who sponsored it.”

“This is an important day for the Pine Tree State,” Pratt said. “Law-abiding citizens shouldn’t have to ask permission to exercise a constitutionally protected right. We don’t require permission for preachers or journalists, and we shouldn’t do it for gun owners either.”