Glenn, who returned the GOA survey 100% in favor of your gun rights, will now face anti-gunner Michael Bennet in the general election in November. 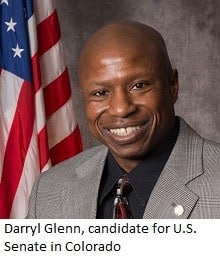 In a year when Republicans are defending twenty-four U.S. Senate seats to the Democrat’s ten, Colorado is one of the few races that could swing from anti-Second Amendment to pro-gun.

Darryl was outspent in the primary, but what he lacked in money he made up for with grassroots supporters and an all-volunteer campaign staff.

He is likely to be outspent even more in the general election, and he may not get much help from the Republican establishment.  On the campaign trail, Glenn criticized the Republican hierarchy for abandoning its leadership role and compromising on core principles.

Glenn also said that he would vote against Mitch McConnell for Majority Leader, instead aligning himself with constitutionalists like Sen. Ted Cruz.

Gun Owners of America is proud to endorse Darryl, and will work to marshal pro-gun voters to his side.

Though he may be outspent, gun owners across the country can help Darryl Glenn counter the millions of dollars that will flow in from Michael Bloomberg and his allies. 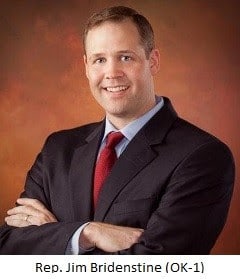 Rep. Bridenstine is a pro-gun leader in the House of Representatives who is not afraid to take on the compromisers in his own party as well as push back against President Obama’s unconstitutional executive overreach.

Not surprisingly, Rep. Bridenstine’s principled defense of the Constitution attracted the attention of moderate Republicans, but their favored candidate did not find favor with primary voters.

Rep. Bridenstine cruised to victory with more than 80% of the vote.

Huge Race Coming up in Arizona

Gun Owners of America is also engaged in a primary against anti-gun turncoat Senator John McCain.

In the Arizona Republican primary, GOA is backing Dr. Kelli Ward, a pro-gun leader in the state senate who is taking on McCain in the August 30 election.

When I was in the Arizona state senate the first bill I sponsored was ‘The Second Amendment Protection Act.’ And I offered it every year thereafter and it got further and further each year. However, it was thwarted every year by big government Republicans. So, even though the GOP had a majority, we could not get the necessary support for a Second Amendment Protection Act.

As a state senator in Arizona, Dr. Kelli Ward is willing to stand up for our constitutional rights.

She’s not interested in getting invited to political cocktail parties.  Just like when she’s pulling a shift as an emergency room doctor, Ward is laser-focused on the job at hand.

Your contribution to GOA will go directly toward helping elect only the best candidates in 2016.  Go here to chip in $20 or more.

Taking on a 30-year incumbent like John McCain is no easy task, but Dr. Ward is gaining on him in the polls. According to Public Policy Polling:

McCain is polling at only 39% in the Republican primary field. He’s benefiting from having multiple opponents. Kelli Ward is at 26%, Alex Meluskey at 4%, Scott McBean at 3%, and Clair Van Steenwyk at 2%. 27% are undecided.

When you narrow the field down to just a choice between McCain and Ward, it’s a tie at 41%. Ward is polling this competitively at this point despite having only 41% name recognition.

It’s no surprise that pro-gunners are upset with McCain. After all, he supported the Toomey-Manchin amendment to ban private sales of firearms.

McCain supported banning inexpensive handguns, so-called Saturday Night Specials, and he pushed for a law requiring gun owners to “lock up their safety.”

John McCain also tried to forbid groups like GOA from even talking about his anti-gun record within months of voters going to the polls.

Dr. Kelli Ward is within striking distance of taking out McCain in the primary–particularly if other candidates begin to drop out of the race.

She supports your right to carry a firearm concealed for your own protection, without first having to prove to the government that you’re not a criminal.

Gun Owners of America is active in these and other races around the country.  We select only the best candidates who will walk the walk, not just talk the talk.

Your contribution to GOA will go directly toward helping elect only the best candidates in 2016.  Go here to chip in $20 or more.

As a State Senator, Kelli Ward earned an A+ rating for her strong defense of the Second Amendment.

Now she can take the fight to Washington, D.C.

John McCain has been in the U.S. Senate for thirty years. The time for change is now–this year, in this Republican primary election.

If we want to see real change in Washington, we have to get behind Second Amendment champions like Kelli Ward, who has already shown a willingness to take on the “big government Republicans” like McCain.

Just imagine the message we will send to Washington by defeating one of the anti-gunners’ favorite Republicans.

CNN and Harry Reid are Not Happy with GOA