CNN and Harry Reid are Not Happy with GOA

Much to Celebrate this Independence Day Weekend!

I was taking some of my children to the batting cages last week when I got the call from a CNN producer.

He wanted me to appear with Carol Costello to discuss gun control in the wake of the Orlando shooting. 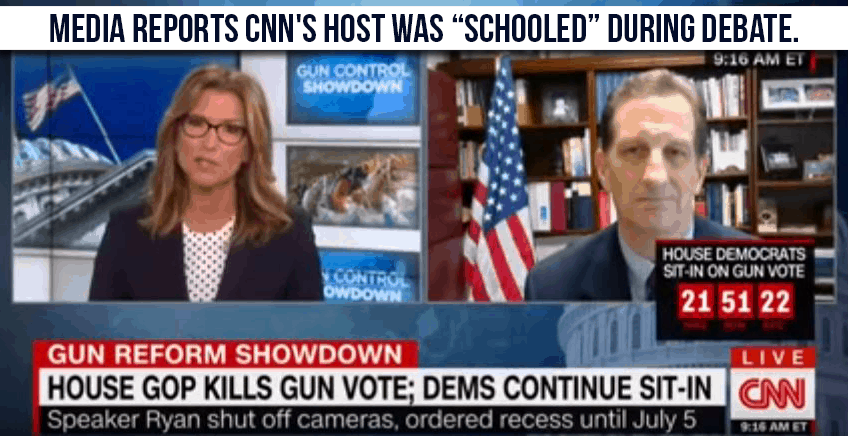 When I agreed to join her the following morning, I had no idea then how viral the debate would end up going.

In addition to the original audience that viewed the debate, there have been almost half a million additional viewers on GOA’s social media pages alone.

This doesn’t even include the more than one million views on other websites and social media outlets where they have reposted the debate.

Media comments have run the gamut, saying the CNN host was “embarrassed,” “schooled” or “crushed.”

It’s very likely that MORE PEOPLE have viewed the debate after it originally aired.

But I’d like to get your take on it!

Please, make sure you view it here and let me know what you think — either via email or Facebook.

Help GOA stay on the front lines. You can join Gun Owners of America today for only $20!

While House Gets Ready to Take up Gun Control, Sen. Reid Expresses Frustration with GOA Members

Moving from the newsroom to the political backroom, there’s been a lot of “gun activity” on Capitol Hill in recent days.

House Speaker Paul Ryan recently announced that he will hold votes next week on barring Americans from buying guns if their names appear on a government watch list. 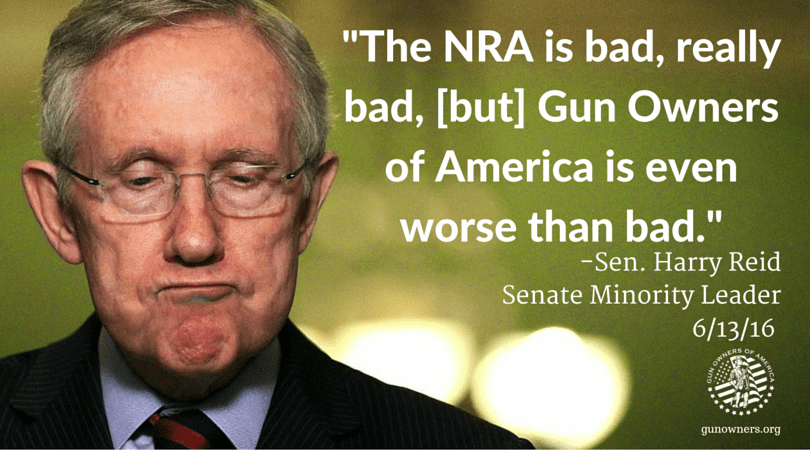 GOA will issue a Call to Action this coming Tuesday, and give you pre-written text to send your Representative.

GOA plans to fight this gun control legislation, every bit as hard as we did on the Senate side — something which garnered the ire of Senator Harry Reid (D-NV), who is quite annoyed with Gun Owners of America.

But it’s not just the GOA staff and me that are frustrating him.

He’s annoyed with you, too!

After all, all of the gun control proposals failed in the Senate last week.

One of the proposals still remains in limbo.  But no gun control was added to the Commerce-Justice-State spending bill.

Not a single one.

And Reid blames you and me for this.

Reid went so far as to say that Republicans are “taking their orders” from Gun Owners of America and the NRA.

It’s a bit overstated, to be sure, but there is no doubt that your activism has played a tremendous role.

The Sacramento Bee reported that GOA’s message — that ALL gun control is an infringement — was finding a receptive audience amongst many Republican Senators:

“Any infringement (on the right to own a gun) violates the Second Amendment,” said Larry Pratt, executive director emeritus of Gun Owners of America.

“The American people find it ridiculous that in response to an ISIS terror attack, the Democrats go on high dudgeon that we’ve got to restrict the Second Amendment rights of law-abiding citizens,” Cruz said.

What the Sacramento Bee had to say is not unique. 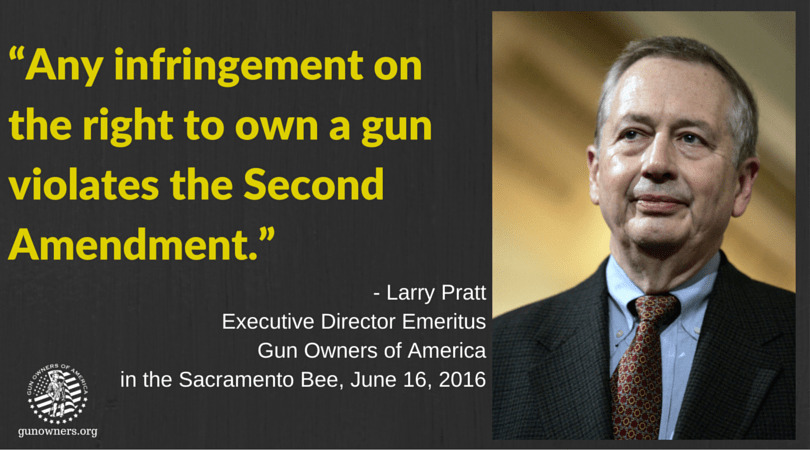 Two years ago, the New York Times credited GOA and its members with playing a huge role in unifying the gun movement — which, ultimately, helped kill the post-Sandy Hook gun control legislation.

Many lawmakers and gun safety advocates believe Gun Owners of America’s rising profile and heavy membership drive has led the N.R.A. to take a more aggressive stance against measures it once supported, like an expansion of background checks to include private gun sales.

Not only that, the Times reported that Republicans were now hesitant to support gun control compromises, citing “Mr. Pratt’s group [aka, GOA] as their biggest impediment, fearing retribution.”

Your loud opposition to gun control makes a HUGE difference.

It is what helps us to defend the Constitution and the Second Amendment, which protects our right to keep and bear arms.

And so I am very thankful that your support allows us to be here, putting the heat on wayward politicians.

Help GOA stay on the front lines. You can join Gun Owners of America today for only $20!

One More Way to Defend the Constitution

The Constitution — and the Declaration of Independence — are two phenomenal documents.  But as you know, they are under relentless attack today.

With your help, though, we will continue to defend the “unalienable rights” endowed by our Creator and the protections that were passed down to us from our Founding Fathers.

In the Declaration, they clearly indicated their “firm reliance on the protection of divine Providence,” and 240 years later, we find ourselves doing the same to defend our gun rights. 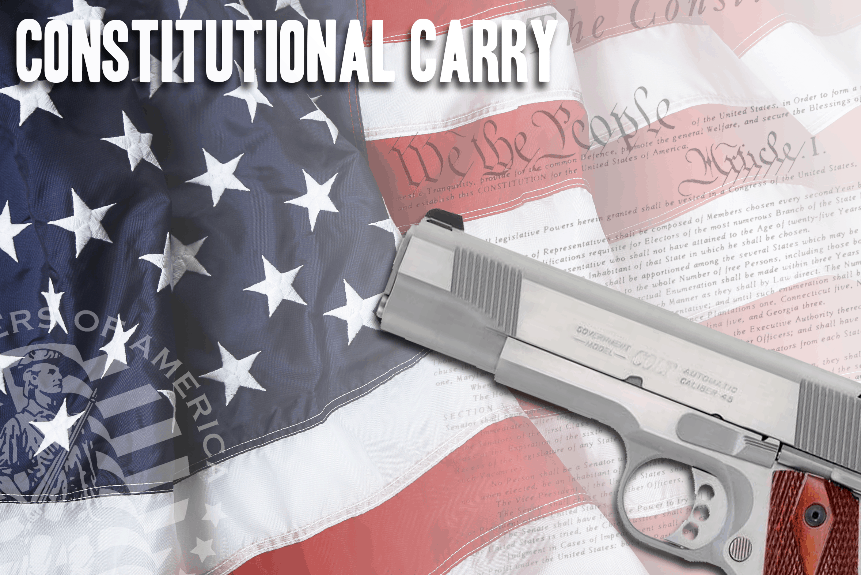 To be sure, we are making tremendous gains:

Freedom is advancing in many areas.  Hence, it’s timely that we will be celebrating Independence Day in a few days.

But in addition to the ways you may choose to celebrate, there’s one more that we would ask you to consider.

And that is to give your pro-gun family and friends a gift membership with Gun Owners of America. 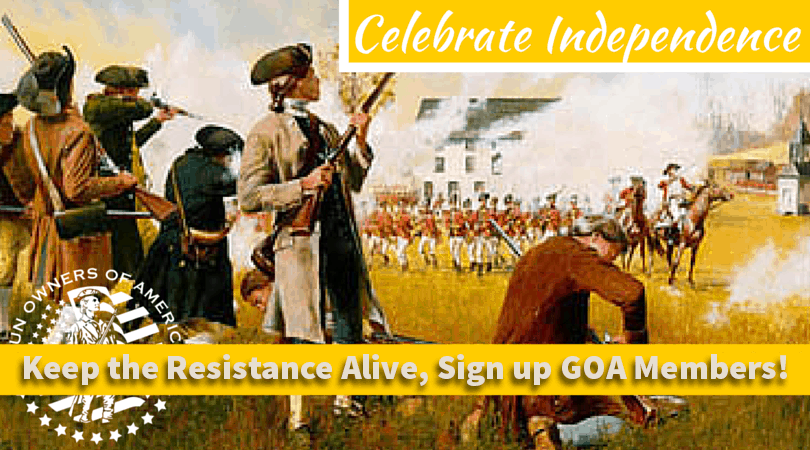 When you do, you increase the voice of the most active grassroots gun lobby that is constantly on the front lines defending your rights.

The more activists who, like you, send their e-mails and postcards to their legislators … the louder your voice becomes in the halls of Congress.

To give a gift membership in Gun Owners of America, simply click on this link.

Once you click on the above link, fill in the information for your family members or friends.

You can then print out a Gift Certificate which you can present to the recipients of your generosity.

Again, thank you for all you do in helping defend our right to keep and bear arms.

Have a safe and happy Independence Day!

P.S. As a personal favor to me, I hope you will consider signing up your pro-gun friends and family as members of GOA through a gift membership. Your support would go a long way in protecting the Second Amendment!

Paul Ryan CAVING on Gun Vote is Exactly Why We Lose