Obama to Ban Thousands of Senior Citizens from Owning Firearms

Scroll down to the “How to Take Action” section below and submit your outrage with Obama’s plan to ban hundreds of thousands of senior citizens from owning guns — thus setting the stage for massive gun confiscations.

Barack Obama understands it is the Second Amendment community that has destroyed his legacy.

And now, like a rabid dog, he is lashing out in an effort to destroy as many law-abiding gun owners as possible.

His most recent scheme is the SOCIAL SECURITY GUN BAN, which was formally published in the Federal Register last month.

How broad will this regulation be?

If you are on Social Security disability by reason of a mental health impairment, then your gun rights are gone. Period. 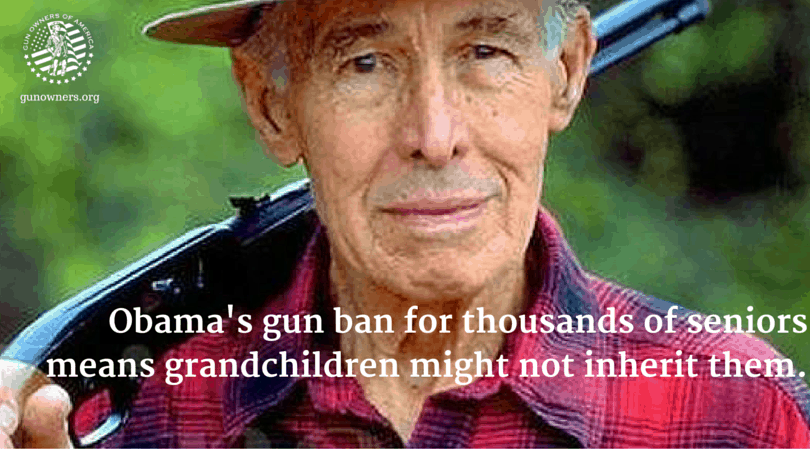 The regulation promises to aggressively search for and take away the gun rights of Social Security Disability recipients with PTSD, ADHD, post partem depression, Alzheimer’s, etc.

But understand this:  Some parts of the regulation, like the definition of “adjudicated as a mental defective” in proposed CFR 421.105, are applicable to all Title II recipients, including old-age programs.

Thus, under this language, if you are a senior and can’t “manage [your] own affairs,” you are specifically acknowledged by the Social Security Administration as being a “mental defective” for purposes of making you a prohibited person.

And, under the NICS Amendments Improvement Act, this would impose a legal obligation on the Social Security administration to search for and turn in your name to NICS as well.

So the question is:  Do you trust Barack Obama?  Because this regulation potentially opens a broader gun ban than it now acknowledges.

And if Obama decides to extend the gun ban to seniors by “executive action,” this regulation will have put all of the procedures and definitions in place to do so.

And guess what? Obama MAY argue that, if this regulation specifically acknowledges that seniors are prohibited persons, then the NICS Improvement Act will require Social Security to take their guns away.

But, argues the Obama administration, errant senior citizens would have to be notified that they were losing their constitutional rights — and would have the legal ability to contest the finding.

If there is anything we have learned from living for a decade under the Veterans Disarmament Act (or “NICS Improvement Act”), it is that the “right” to spend $10,000 in legal fees to contest the government’s finding is an ILLUSORY RIGHT which is virtually NEVER capable of being invoked.

The “right” to use a “relief from disabilities” program to restore one’s gun rights after-the-fact is even more useless.

How many of the 250,000-plus veterans who lost their guns — through the same star-chamber procedure now proposed for seniors — have ever successfully contested the government’s seizure of their Second Amendment rights?

Obama concedes that “75,000” seniors would be turned into felons, but anyone who thinks the impact of this proposal can be contained at 75,000 grandmas and grandpas may want to remember Obama’s “You can keep your doctor” track record of veracity.

Even the Los Angeles Times last year suggested the figure could be as high as four million seniors.

How to Take Action

The Social Security Administration has posted regulations here.  And they are inviting comments from the general public.

While you can fax or mail your comments, they “strongly recommend that you submit your comments via the Internet.”

So here’s what to do:

NOTE:  The regulations state that, “The system will issue a tracking number to confirm your submission.  You will not be able to view your comment immediately because we must post each comment manually.  It may take up to a week or more for your comment to be viewable.”

You have until July 5 to submit your comments.

To Whom It May Concern:

I am writing to you regarding the SOCIAL SECURITY GUN BAN — docket number SSA–2016–0011 — which was formally published in the Federal Register in May.

I am in opposition to this rule and urge the administration to withdraw it.

We have seen this game before at the hands of the Veterans Administration:  To date, over 250,000 law-abiding veterans who have served their country honorably have had their constitutional rights stripped from them.

The VA claims veterans can contest the removal of their rights — and can petition to have them restored.  This rule claims the same right to petition.

For this reason, data shows that a tiny fraction of these veterans have successfully used these illusory mechanisms to reclaim their rights.

Under this proposed rule, if a person is on Social Security disability by reason of a mental health impairment, then their gun rights are gone. Period.

The regulation promises to aggressively search for and take away the gun rights of Social Security Disability recipients with PTSD, ADHD, post partem depression, Alzheimer’s, etc.

But understand this:  Some parts of the regulation, like the definition of “adjudicated as a mental defective” in proposed CFR 421.105, are applicable to all Title II recipients, including old-age programs.

Thus, under this language, if a senior can’t “manage their own affairs,” they are specifically acknowledged by the Social Security Administration as being a “mental defective” for purposes of making them a prohibited person.

Barack Obama claims that this regulation would involve 75,000 persons (who would unconstitutionally lose their fundamental rights), but you understand that the number is more likely to be in the multiple hundreds of thousands.

Then you propose to turn in the names of these innocent law-abiding Americans to the FBI, for the sake of unilaterally stripping them of fundamental constitutional guarantees — all without a hearing or any due process whatsoever.

And, while you propose to do this on the basis of your victims’ incompetence (“mental defect”), you simultaneously assume they are competent to know what you are doing to them — and to round up and dispose of all their firearms in order to avoid becoming Instant Felons.

You probably don’t know this and probably don’t care:  But octogenarians are not a high-crime demographic.  Very large numbers of them have firearms which they intend to pass on to their children, however.

And most of them would be surprised that they were being turned into “Instant Felons,” subject to SWAT teams and potential prison sentences.

I understand you’re marching to the beat of a Leftist political drummer.  But understand this:  groups like Gun Owners of America will work with Congress to defund this corrupt exercise.

And every senior citizen in America will go into the polling booth this fall with the knowledge of your unsuccessful little effort to turn them into criminals.

For all these reasons, and more, I urge you to withdraw the SOCIAL SECURITY GUN BAN — docket number SSA–2016–0011.