Please click on the Take Action button to urge congressman to commit to vote against Kevin McCarthy for Speaker — and to support Rep. Jim Jordan instead. The pre-written emails contain separate messages for Republicans and Democrats.

You probably heard the news: House Speaker Paul Ryan will be stepping down from Congress this year. 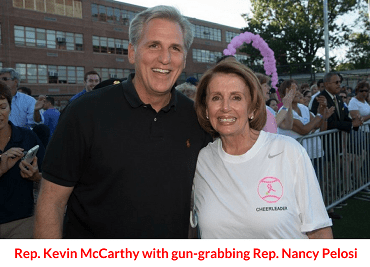 And that means that commitments are being made right now to decide who the next Speaker will be — assuming that Republicans win retain the House this November.

That’s why I need you to contact your congressman right away.

It’s urgent that every Republican member of Congress hears that the American public does NOT want anti-gun Majority Leader Kevin McCarthy to accede to the “throne.”

And every Democrat needs to hear that Nancy Pelosi should also be vetoed as their party’s choice for Speaker.

For eight years, we were able to stop all gun control under Barack Obama, Nancy Pelosi, and Harry Reid.

But then — with Republicans fully in control — Paul Ryan, Kevin McCarthy and their team became the “Benedict Arnolds” who finally delivered gun control.

They pushed through the odious Fix NICS Bill — which could send the names of millions of law-abiding veterans and senior citizens to the national gun ban system, called NICS.

Furthermore, when gun owners resisted their slippery scheme, Ryan, McCarthy, et al., snuck it through in March on a must-pass bill which was over 2,200 pages in length and which was made public only 17 hours before it was scheduled for a vote. 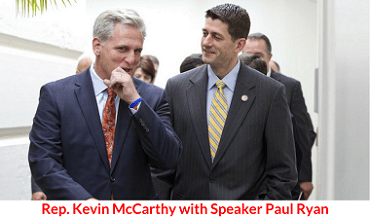 The bill, the anti-gun Omnibus bill, was hatched with Senator Chuck Schumer and Minority Leader Nancy Pelosi in a closed room in the dead of night.

Not only did Ryan and McCarthy deliberately keep their gun control plans a secret, they deceived Republican congressmen and gun owners by insisting that Fix NICS wouldn’t be passed without reciprocity.

But, of course, we now know that this was just a ruse.

Ryan and McCarthy made sure that gun control passed in the Omnibus spending bill in March.

And, in doing so, they simultaneously killed reciprocity, veterans’ rights, hearing protection, and other pro-gun bills that they had cynically pretended to support.

Will Republicans Nominate the “D” Rated McCarthy as the Next House Speaker?

So we all knew Paul Ryan was willing to compromise when it came to the Second Amendment.

But, now that he’s stepping down, he’s preparing to hand the Speakership throne over to Kevin McCarthy, his partner-in-crime who has a very low rating on Second Amendment issues by Gun Owners of America.

McCarthy has a “D” rating from GOA — as he, among other things:

Republicans like Ryan seem to think that the speakership position, which is second-in-line to the presidency, can be inherited like the “divine right of kings.”

Never mind the fact that the hereditary “prince” (McCarthy) has pushed gun control, lied about it, and is hated by the “little people.”

All that is irrelevant to the GOP establishment.

As Marie Antoinette would put it: “Let them eat cake.”

There is a pro-gun congressman who has shown leadership potential already, and his name is Jim Jordan of Ohio.

Jordan is “A” rated with Gun Owners of America, and he is the cofounder of the House Freedom Caucus — an influential group of congressmen who love the Constitution and want to rein in the excesses of the federal government.

Many in Washington are looking to Jordan to run for Speaker, although he has not yet officially announced his candidacy.

We can help make the difference by creating a groundswell of support for this pro-gun champion. 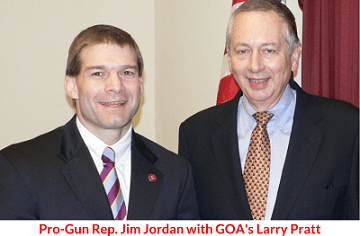 That’s why I need you to urge your congressman to help draft Jim Jordan for Speaker of the House.

And now is the time when we have maximum leverage to ensure that the Republican candidates seeking our vote commit that they will support a pro-gun champion like Jim Jordan, while never voting for Kevin McCarthy as Speaker.

Even with its current composition, if 23 Republicans withhold their votes for McCarthy, he could not be elected Speaker.

This is important because Ryan could resign this summer — and try to hand the scepter to McCarthy in a quickie procedure (much like the Omnibus).

So please urge your cogressman to commit to vote against Kevin McCarthy for House Speaker. And urge support for Jim Jordan instead!

The pre-written emails contain separate messages for congressmen based on their party — as Democrats will be urged to oppose Nancy Pelosi for Speaker.

P.S. Please contact your congressman so that we can prevent an anti-gun Representative from becoming House Speaker. And if you’ve let your membership lapse, make sure to renew your membership in Gun Owners of America today for only $20!

Rally for the 2A with Larry Pratt!