Comes word, from the Center for Responsive Politics, that Leftist billionaire George Soros, through his Soros Fund Management, is one of John Kasich’s top financial contributors.

This can hardly be a surprise. 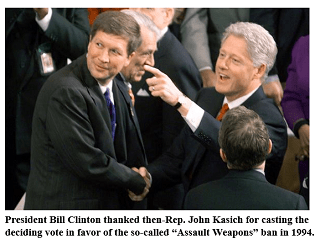 Kasich and Soros share two important traits:  (1) their desire to mess up the Republican selection process for devious motives, and (2) their absolute hatred for the Second Amendment.

Kasich’s antipathy towards gun rights is no secret to anyone who’s watched his career.  Make no mistake about it:  When we are winning by a large margin — when we don’t need John Kasich’s vote — he’s usually there to give us a big, wet “Don Corleone kiss.”

But when the vote is close and the future of the Second Amendment is at stake, “Godfather John” usually leaves us a severed horsehead in our bed.

Thus, Kasich famously joined a gaggle of fellow-RINO’s and cast the deciding vote to impose a ban on semi-auto firearms.  For this, he received a personal letter of thanks from a gun-hating Bill Clinton.

Kasich voted for background checks in 1993, a system where roughly 95% of denials are “false positives.” Loretta Lynch’s Justice Department has, since November, shifted FBI employees to insure that, if you’re illegally blocked by NICS from purchasing a firearm, you can never get your record corrected.

In 1999, Kasich voted to retain restrictive gun ban in Washington, D.C.  Not only that, Kasich joined the effort to pass 90% of Clinton’s anti-gun agenda as a form of “gun control lite.”

Elements of the Kasich/Clinton agenda included:

(1) Provisions making it virtually impossible to legally teach kids how to use firearms;

(2) A gun show ban (masquerading as a gun show Instant Check); and

(3) Mandates to require you to “lock up your guns.”

Had Clinton been successful in passing his post-Columbine anti-gun agenda, it would have provided a legislative platform which could easily have eviscerated the Second Amendment over the last decade-and-a-half.

But Kasich’s efforts to outlaw guns — drip-by-drip — continues to this day.

Kasich continues to be a chief advocate of actual or de facto amnesty, claiming that enforcing our immigration laws would be “inhumane.”

Of course, if Kasich gets his way, the legalization of 11 million illegals will have the same effect on the American electorate that the 1986 Simpson-Mazzoli amnesty had on California. The country as a whole would become deep “anti-gun blue.”

And, of course, Kasich was one of the first RINO’s to legitimize the anti-gun ObamaCare program by bringing its massive Medicaid segment into his state.

Now, all it will take is for Obama to do a computer search of Kasich’s Medicaid beneficiaries for “PTSD,” “Alzheimer’s,” and other “mental defectives,” and the gun rights of tens of thousands of law-abiding Ohioans could be jeopardized.

And all of this was done by Kasich’s particularly nasty form of politics which he is now trying to morph, incredibly, into his “Mr. Nice” act.

These actions, of course, reflect the hatred for guns by Kasich’s patron, George Soros.

You may remember that, when Soros 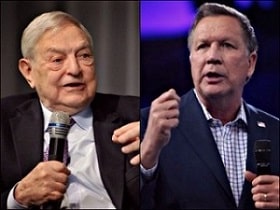 launched his campaign of “exposes” designed to destroy the conservative movement piece-by-piece, his first target was Gun Owners of America — which Soros viewed as even more dangerous than the Koch brothers.

But perhaps as bad as Kasich’s anti-gun record is his determination to destroy the GOP selection process for personal gain.

Surely, even the vainglorious Kasich understands that, the longer he stays is the race, the longer the “divided field” makes it easier for an establishment candidate to hijack the process at the convention.

Polls have shown — here and here — that Ted Cruz would beat Donald Trump in a head-to-head matchup.

But by becoming the REAL “chaos candidate,” Kasich helps destroy the Republican Party by throwing the nomination to someone who is despised by the grassroots. In so doing, Kasich does the bidding of his master, George Soros.

Ted Cruz would be the natural one to aggressively call out anti-gunner John Kasich for his anti-gun record.

Please contact Ted Cruz and urge him to expose Kasich.  Let’s not let Kasich pull the wool over the eyes of American voters.

P.S.  While you cannot use GOA’s Legislative Action Center to email Senator Ted Cruz — unless you are a constituent of his — you can easily contact him through his webform.

So simply copy-n-paste the pre-written letter below into Senator Ted Cruz’ webform and urge him to expose Senator John Kasich’s anti-gun record.

Thank you so much for your strong defense of the Constitution — and in particular, the Second Amendment right to keep and bear arms.

Gun Owners of America has informed me that John Kasich has a long record of supporting gun control, including the following:

1) Kasich cast the deciding vote to impose a ban on semi-auto firearms, and for this, he received a personal letter of thanks from a gun-hating Bill Clinton.  See: tinyurl.com/hp4ucsp

2) Kasich voted for background checks in 1993, a system which is now blocking a percentage of legal gun purchases.  Loretta Lynch’s Justice Department has, since November, shifted FBI employees to insure that, if someone is illegally blocked by NICS from purchasing a firearm, they can never get their record corrected. See: tinyurl.com/hp4ucsp

4) Also in 1999, he voted for provisions making it virtually impossible to legally teach kids how to use firearms; for a gun show ban (masquerading as a gun show Instant Check); and for mandates to requiring people to “lock up their guns.”  See: tinyurl.com/jq84rcd

With John Kasich deciding to remain in the presidential race, I think it’s important for someone on the national level to expose his anti-gun votes.

I hope you will continue to point out Kasich’s anti-gun positions.