When Marco Rubio was a local commissioner in Florida in 1999, he voted to ban guns from local parks. 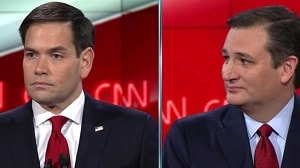 Rubio’s problem is that, when Senator Ted Cruz called attention to Rubio’s anti-gun vote, Marco’s response was to call Ted a “liar.”

This was part of a larger narrative in which Donald Trump and Rubio were hurling “pants on fire” insults at Cruz.

But when Rubio disavowed his 1999 anti-gun vote — falsely accusing Ted Cruz of Rubio’s own sins — he made a serious mistake.

Because it turns out that Breitbart had a videotape of Rubio casting the anti-gun vote which he was denying.

And not only was Rubio caught red-handed in a lie — about a significant and unambiguous misrepresentation — he was caught accusing others of “lying,” when in fact, it was Rubio himself who was not telling the truth.

As we said, politicians make mistakes. And Marco Rubio’s misrepresentation won’t be the worst mistake he’s made this week. (His worst mistake would be continuing his campaign in a context where the only conceivable outcome would be to prevent the pro-gun Cruz from seizing the nomination.)

But, just as Ted Cruz fired a top staffer in order to maintain the reality and appearance of scrupulous honestly, we do believe that Rubio owes Cruz an apology for his undeniable and conspicuous lie against him.

Incidentally, Cruz’ scrupulous honesty — in the face of child-like, baseless, repeated accusations — reaffirms Gun Owners of America in our decision to endorse Ted Cruz as, frankly, “the only adult in room” in a field of Republican candidates who appear, increasingly, like playground bullies.

Paid for by Gun Owners of America.
Not authorized by any candidate or candidate’s committee.

Only Cruz Can Beat Trump