Click on the Take Action button and urge Representative, to reject every word of gun control and to send a bill repealing gun-free school zones to the President. The letters are specially crafted for Republicans or Democrats.

You Guys are Doing a Great Job!

We don’t need to tell you: Every major Leftist institution in America is moving heaven and earth for the enactment of a huge gun ban.

And unless we fight equally hard, our Second Amendment rights could be gone. 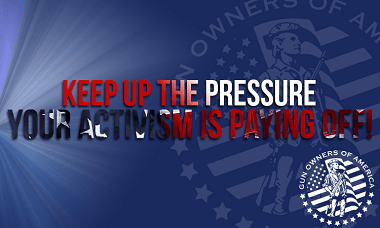 But just so you know, there is evidence that our phone calls and emails are starting to have an impact.

This was the headline from one news site in the nation’s capital: “Momentum For Gun Control Is Losing Steam Quickly On Capitol Hill.”

This is good news. But we can’t let up now.

So today, we are focusing on the House.

Please email Representative and communicate your opposition to using a tragedy as an excuse to take away God-given liberties.

Tell your congressman to OPPOSE every word of gun control that gets sent over by the Senate.

And if you have time, go ahead and call RepName at Phone to register your opposition to gun control — and your support for repealing gun-free zones.

Pro-gun Senators are emboldened to fight for 2A Rights!

To recap: Democrats like Charles Schumer and Dianne Feinstein are teaming up with sell-out Republicans to enact a package which we call “The Second Amendment Infringement Act of 2018.”

That could be enacted as one bill or three bills, but it contains all of the elements for politicians who want to effectively repeal the Second Amendment, but don’t have the 3/4 of the states to change the Constitution. (See the accompanying chart.) 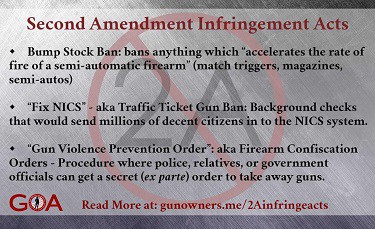 But as I suggested above, our grassroots support is emboldening pro-gun Senators on the Hill. According to the article that I cited earlier:

An attempt to bring up that bill with dispatch failed when Sen. Mike Lee, a Utah Republican, blocked a bid by GOP leadership to pass it without debate.

Kudos to Senator Lee and the several other pro-gun Senators who are backing him!

Now that the Senate is in recess for the rest of the week, it’s important to shift gears briefly and bombard the House with phone calls and emails.

Because remember, whatever gets passed in the Senate will get thrown back to the lower chamber.

Representatives will play a key role in battling gun control

Having said that, the House leadership at that time promised their fellow members and us that, if “Fix NICS” came back from the Senate without reciprocity, it would not be considered.

Not only that, several dozen congressmen signed a letter authored by Rep. Ted Budd (R-NC) which reiterated the same point.

The letter was a terse message to the Senate, telling them that any “gun legislation” that comes back to the House, MUST HAVE CONCEALED CARRY REICPROCITY.

If the House sticks to its guns, so to speak, it will make it very difficult for Congress to pass the “Second Amendment Infringement Act.”

The reason is that Senate Democrats like Chuck Schumer have not been willing to give an inch in his demand for gun control — and nothing but gun control.

Some congressmen are beginning to wet their pants

GOA is hearing that some congressmen are already beginning to waver. Of course, we’ve been focusing our attention on the immediate battle — in the Senate.

So House members really haven’t been hearing from GOA members all that much … at least, not yet.

This is why we need to buck up the members of the House — especially Republicans.

So please click here to send Representatives a pre-written letter today — and remember that your message has been specially crafted for Republicans or Democrats.

And if you have time, why don’t make a quick call — and register the same message as what you’ve been telling the Senate:

3. Arm teachers and principals who want to carry.

Thank you for all your support!