Whether We Win or Lose Could Come Down to Our Choice

Please renew your calls to your Senators at 202-224-3121. If every Second Amendment proponent ties up the phone lines on Capitol Hill, it is still possible to stop EVERY SINGLE WORD OF GUN CONTROL, as we did after Columbine and Sandy Hook. Click here to send an email which shows your Rep. & Senators that arming teachers is ALREADY working around the country!

We Can Tie up the Capitol Hill Phone Lines, or We Can be Stuck with Dreadful Gun Control

I know that we have asked you to make several calls in the past few days.

And I realize that by now, you could be growing weary. That temptation is there for us too.

But when our rights are under attack, we can’t grow weary in doing good. 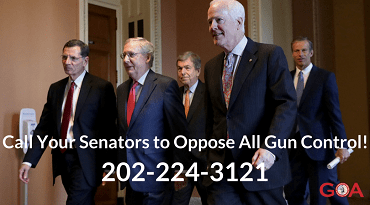 George Washington didn’t, when his troops were suffering at Valley Forge. And neither should we, when our rights are under attack, as well.

If there’s any consolation, you’re merely being asked to wield a phone rather than a sword.

WE HAVE TO COUNTER THE ANTI-GUN LEFT

And some cowardly squish Republicans are willing to give them the gun control they’re asking for.

So unless those who favor the Second Amendment can tie up the Capitol Hill phone lines, we fear they will succeed.

That’s why renewed calls are needed to your two Senators at 202-224-3121, urging them to oppose every single word of gun control … and to stand with the governors who are calling for arming teachers!

And you can click here to email your Representative and Senators a summary of what several pro-gun Governors had to say yesterday to the President — all of them showing how arming teachers is ALREADY working in their states.

The core proposal that’s on the table is the Second Amendment Repeal Act of 2018 — legislation that we alerted you to on Monday.

This package may come to the Senate floor as one, two, or three bills. But, even before the Senate passes this package, Sen. Schumer and company have already announced that IT IS NOT ENOUGH.

THE SECOND AMENDMENT INFRINGEMENT ACT OF 2018 consists of:

(2) LARGE NUMBERS OF PEOPLE LOSING THEIR RIGHTS: The Cornyn-Schumer-Feinstein-Murphy-Blumenthal “Fix NICS” bill would create a $625,000,000 “bribe pot” plus a national mandate to force any name which could conceivably be sent to NICS to be sent to NICS.

What new people will be stripped of their rights?

(3) SECRET HEARINGS AND SWAT TEAMS: Called “extreme violence protective orders,” these unconstitutional proceedings would allow a star-chamber proceeding to take away your rights.

You would not be notified or allowed to participate.

The first thing you would learn is when SWAT teams arrived at your house to ransack your home and, if you resisted, to arrest or even kill you and your family.

THIS IS JUST THE BEGINNING 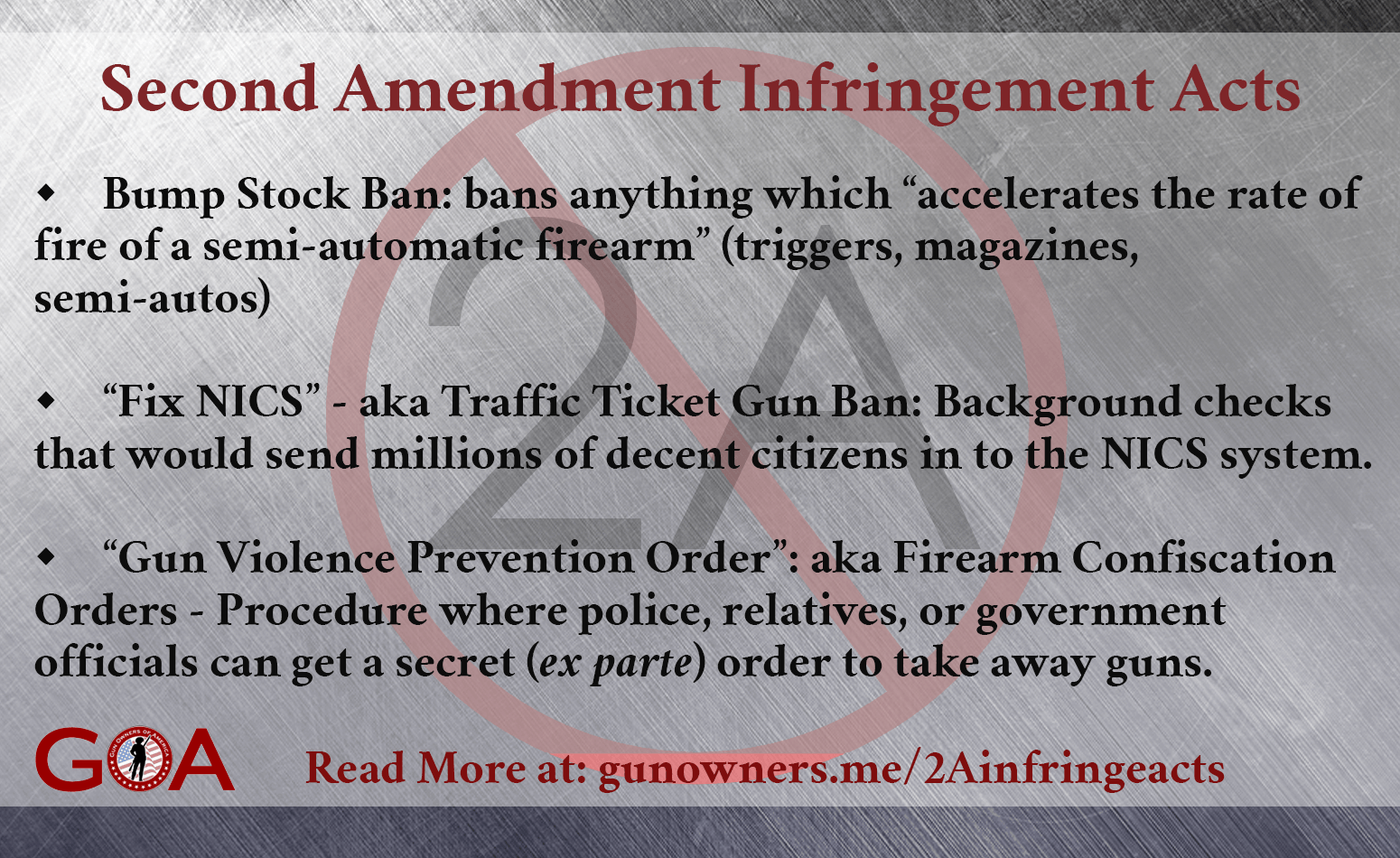 Even before the Second Amendment Infringement Act hits the floor, anti-gunners have attacked it as being a “nothing-burger.”

(2) an out-and-out explicit semi-automatic ban (although the Second Amendment Infringement Act would stealthily do the same thing by targeting bump stocks); and,

Because the age-related gun ban has been misreported so frequently, let’s talk a little more about that.

Because in our country, 18 is the age of adulthood. One can vote … serve in the military … get married … and purchase a gun.

Imagine telling a 20-year old mom that she cannot purchase a firearm to protect her home? That’s diabolical.

As a practical matter, if Congress is going to disarm 18-20 year olds, they’re going to have to bar them from the police and military. Are we ready for that as a nation?

One final point: The reason why gun grabbers are so eager to bar young people from using or owning firearms is that they understand that this is the point in life when love and responsible use of firearms is passed from generation to generation.

By prohibiting young people from owning and using firearms, they intend to snuff out gun ownership with this generation.

So bottom line: If Second Amendment proponents tie up the phone lines on Capitol Hill, it is still possible to stop EVERY SINGLE WORD OF GUN CONTROL, as we did after Columbine and Newtown.

And you can click here to send an email which shows your Representative and Senators that arming teachers is ALREADY working around the country!

If we fail to step up to the plate, now that every liberal institution in America is out to destroy us, we will surely earn the resounding loss which will come our way.