Right now, we are winning the battle to block any Supreme Court pick put forward by Obama. So continue to contact your Senators and Majority Leader Mitch McConnell and urge him to stand their ground.

Your Activism is Making a Difference!!!

Your activism has made a huge difference in protecting our Second Amendment rights.

When Antonin Scalia died earlier this month, the anti-gun Left immediately saw this as an opportunity to reshape society — and to gut the Second Amendment. 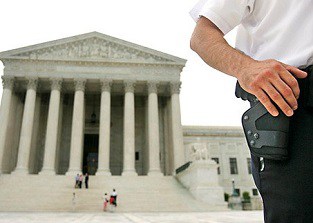 The New York Times interviewed several academics last week, and they all agreed that if and when Obama’s Supreme Court pick is confirmed, “the pendulum would swing pretty quickly on gun control.”

They all agreed there would be a “major shift in the kind of gun control laws that get approved by the court.”

This is the reason why we have encouraged you, for almost two weeks now, to urge Senators to spike any Supreme Court nominee Obama puts forward.

Some Senators initially felt that the Republicans should at least hold a vote on Obama’s pick, but this is a very dangerous idea for several reasons.

But after GOA began to mobilize the grassroots in these states, Senators like Grassley and Tillis pulled back from the edge of the cliff.

Since the GOA alerts went out last week, both of these Republican Senators have listened to our members and concluded the best option is to oppose any action on the nominee.

These two Senate Republicans have now joined a larger Republican coalition — made up of Ted Cruz and others — announcing their opposition to Obama’s anti-gun pick.

In a letter to Mitch McConnell, these Senators wrote that the Senate Judiciary Committee “will not hold hearings on any Supreme Court nominee until after our next President is sworn in on January 20, 2017.”

That is the message that thousands of you have delivered to the Senate, deluging their offices in the past two weeks.

And that is exactly the position that Senate Republicans must adopt if we are going to keep the anti-gun Left from effectively ripping the Second Amendment from the Constitution.

Of course, you know that Republicans are notorious for wilting under pressure.

And that’s why we asked you last week to buck up Majority Leader Mitch McConnell, urging him to NOT back down on blocking Obama’s “swing vote” — and to “leave the next Supreme Court nomination to the next President.”

Again, your response has been overwhelming, and it led to an incredible announcement on Tuesday.

That’s when Senator McConnell told fellow Republicans there isn’t “a snowball’s chance in hell” that he’ll back down on his opposition to an Obama pick for the Supreme Court.

Thank you so much for taking action; it is making a remarkable difference!

But we can’t let down now — there’s too much at stake.

Obama’s Nominee Would Swing the Pendulum on Gun Control

Ginsburg continues: “I suspect we would see a major shift in the kind of gun control laws that get approved by the court.  Look for enhanced registration requirements as the first step.”

So there you have it. If Barack Obama gets his Supreme Court pick, you can expect to see more gun registration, more gun bans, more limitations on ammunition — and all of it would be approved by the Supreme Court.

We know that all of this would violate the “shall not be infringed” protections in the Second Amendment.

But as a practical matter, if the Supreme Court lurches to the left, good people will go to prison for exercising their constitutionally-protected rights.

So where are we now?

Well, we know that Barack Obama, the most lawless and unconstitutional president in history, will argue that Senate Republicans have a constitutional obligation to act on the nominee that he picks.

Whatever the Constitution allows, it does not REQUIRE the Senate to advise and consent — or to take any action whatsoever on a treaty or nomination.

Ironically, Harry Reid made this very point several years ago when he was the Senate Majority Leader.

And Vice President Joe Biden indicated the same when he was in the Senate (in 1992).

The media is going to intensify the heat on Senate Republicans to force them to cave in.

Gun owners, and constitutionalists all over the country, need to be the counter-pressure.

So please continue to contact your Senators and Majority Leader Mitch McConnell.

Right now, there are two Republicans who are insisting on a vote for Obama’s Supreme Court pick.  Those two Senators are Mark Kirk (IL) and Susan Collins (ME).